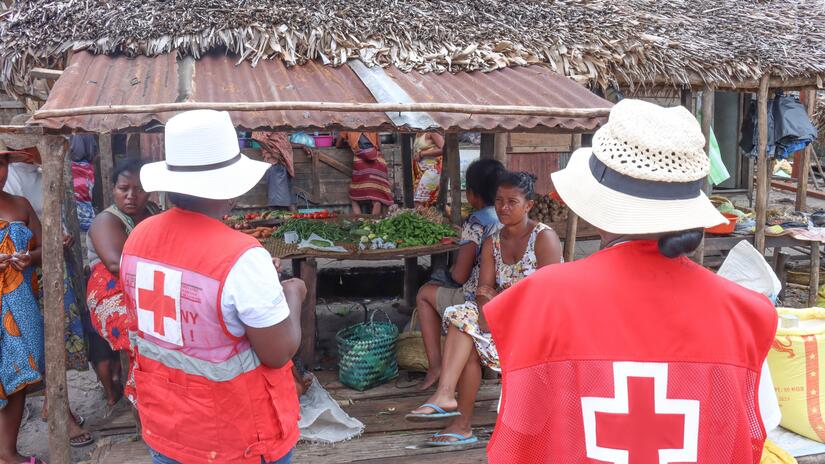 Teams from the Malagasy Red Cross Society (MRCS) and the International Federation of Red Cross and Red Crescent Societies (IFRC) in the eastern part of Madagascar are working around the clock to minimize the humanitarian impact of the fast-approaching Tropical Cyclone Emnati.Andoniaina Ratsimamanga, the Secretary General of Malagasy Red Cross said:“There is a risk of a double tragedy, as some communities are expected to be hit by a second cyclone in less than a month. Tropical Cyclone Emnati is likely to have a devastating effect on communities on the eastern coastline of Madagascar that are still reeling from the impact of Cyclone Batsirai. Many have lost their homes, crops and livestock. We are truly worried and call upon partners to increase their support and avert a humanitarian tragedy.”The arrival of Emnati will only worsen an already dire humanitarian situation. The impact of Cyclone Batsirai, which made landfall on the east coast of Madagascar on 5 February 2022, continues to be felt in the regions of Atsinanana, Fitovinany, Vatovavy and Atsimo-Atsinanana. In Vatovavy region, the most affected districts are Nosy-Varika and Mananjary. In Fitovinany region, the most affected districts are Manakara, Vohipeno and Ikongo, with 140,000 people in need of assistance.Tomorrow, with projected windspeeds of 220 km per hour, tropical Cyclone Emnati is expected to strike the same regions that were already hit by Batsirai: Atsinanana, Vatovavy and Fitovinany. Ahead of its landfall, the IFRC and Malagasy Red Cross Society teams, as well as partners in the region, are providing early warning support and preparing emergency relief items to help communities living in the cyclone’s path to stay safe. The Malagasy Red Cross Society is part of the national emergency response mechanism, which is led by the Malagasy Government, through the National Office for Risk and Disaster Management (BNGRC). To support the Malagasy Red Cross to help affected communities, the IFRC is stepping up its response efforts and is seeking additional funds.Alina Atemnkeng, who is currently in Mananjary leading IFRC’s response following Cyclone Batsirai, as well as the preparedness efforts ahead of Emnati’s landfall, said:“Malagasy Red Cross Society’s teams, IFRC teams and partners are on high alert and are deployed in communities, warning them of the approaching storm. Red Cross volunteers are sharing early warning messages with communities, preparing evacuation sites and helping communities to move to safer locations.”Atemnkeng added: “As we respond, we need to think short-term and long-term at the same time: more cyclones will come, and we need to ensure that communities are adequately protected from the inevitable, subsequent storms. Given the overall challenges caused by climate change, we reiterate our call to governments, regional intergovernmental bodies and our partners to strengthen their investments in disaster risk reduction, with a particular focus on preparedness actions.”Madagascar is one of the ten most vulnerable countries to disasters worldwide and faces compounding hazards. While the eastern parts are battling cyclones, the southern parts are experiencing severe drought leaving at least 1.3 million people in need of food assistance. Globally, we are seeing that climate change is aggravating the risk of complex emergencies, which are increasingly challenging for the humanitarian community to respond to.*Source  International Federation of Red Cross and Red Crescent Societies (IFRC)