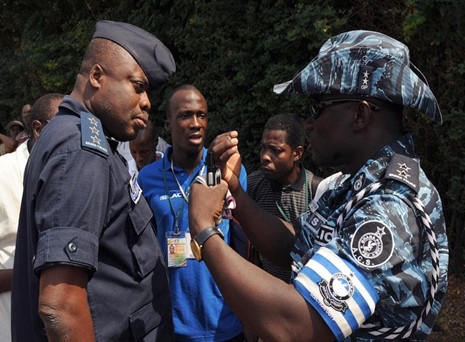 The Bawku District Police, in collaboration with the military, upon intelligence, on January 31, 2022, arrested three persons suspected to be involved in the recent gunshots and Killings in Bawku. The Operation led by C/SUPT. Adamu Seidu and SUPT. Simon Peter Ankabati, the Bawku District Commander, with assistance from the military first visited the residence of the Suspects, Sunday and Abacha Adamu but the team met their absence.

The exhibits, Police sources said were hidden in a pot of water on the suspect’s compound. Police sources revealed that intelligence gathered indicates that the suspect is the person who has been supplying and servicing weapons for other suspects.

The joint Police and Military team proceeded to Natinga, another suburb in the Bawku area and arrested suspect Ibrahim Fatawu. One other suspect however absconded through a gutter upon seeing the police.

The team also arrested a third suspect, Mohammed Abubakar who was alleged to be a member of the group of persons who fired into an FPU vehicle belonging to the Police on December 25, 2021, at Missiga, on the Pusiga road. Police sources said.

All three suspects have since been detained and will be processed for court while the exhibits have also been retained for evidential purposes, Police sources confirmed.