As part of the commemorative event, a football competition between various Eritrean community teams was organized by the Eritrean Embassy in the Republic of Sudan. 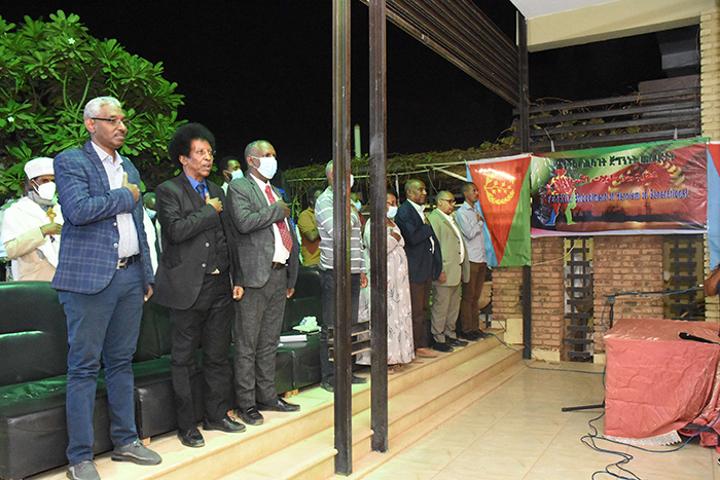 Eritrean nationals in Khartoum and its environs as well as in Riyadh and its environs commemorated the 32nd anniversary of Operation Fenkil with patriotic zeal.As part of the commemorative event, a football competition between various Eritrean community teams was organized by the Eritrean Embassy in the Republic of Sudan in cooperation with the Eritrean community in Khartoum.Commending the youth for the competitiveness and discipline they demonstrated during the competition, Mr. Isa Ahmed Isa, Eritrean Ambassador to Sudan, expressed readiness for creating a conducive atmosphere for enabling the youth to develop their sports capacity.Indicating that 392 sportsmen, coaches, and coordinators have been involved in the program, Mr. Yakob Tesfay, chairman of the ‘Eri-League’ Khartoum Federation, expressed appreciation to those that contributed to the success of the program.Likewise, at a meeting the Eritrean nationals conducted in Khartoum, they expressed conviction to strengthen organization and participation in national affairs.Speaking at the meeting, Ambassador Isa Ahmed Isa said that the secret for the success of Eritrea is the unity and strong organization of its people inside the country and abroad and called for reinforced effort for a better outcome.In the same vein, Eritrean nationals in Riyadh and its environment commemorated the 32nd anniversary of Operation Fenkil under the theme “FENKIL: Embodiment of Heroism of Generations”.
*Source Ministry of Information, Eritrea By 2035, Africa will have the world’s largest workforce-bigger than China’s or India’s