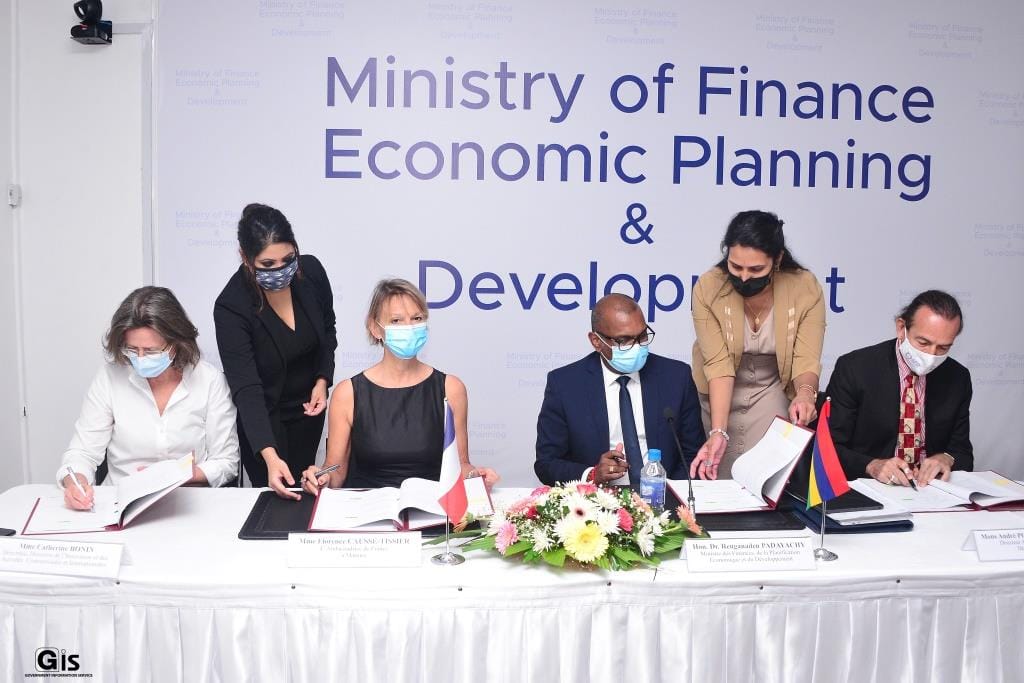 PORT LOUIS, Mauritius, February 15, 2022/ — Two agreements for financial assistance, totalling EUR 2,1 million, from the Agence française de Développement (AFD), were signed, this morning, during a ceremony held in Port-Louis.A grant of EUR 1.1 million was extended to Mauritius under the 2050 Facility: ‘Construire une vision commune et une trajectoire neutre en carbone et résiliente à l’horizon 2050’ (Building a common vision and a carbon-neutral and resilient trajectory by 2050). As for the partnership agreement Fund for Technical Expertise and Experience Transfers (FEXTE), ’Etude du littoral’ (Survey of the coastline), a financial assistance of EUR 1 million was obtained. The financial, administrative and technical execution of the agreements will be carried out by the Ministry of Environment, Solid Waste Management and Climate Change.Several eminent personalities were present at the ceremony, including the Minister of Finance, Economic Planning and Development, Dr Renganaden Padayachy; the Ambassador of the Republic of France to Mauritius, Mrs Florence Caussé-Tissier; the Director of the AFD for Mauritius and Seychelles, Mr André Pouillès-Duplaix; and the Director of the International, du Développement et de l’Innovation at the Bureau de Recherches Géologiques et Minières, Mrs Catherine Bonin.In his address, the Finance Minister underlined that the two agreements would contribute significantly to strengthen the country’s resilience to climate change. The Minister stressed the urgent need to act against climate change and said that Mauritius, as all Small Island Developing State, was disproportionately facing the impacts of climate change, despite emitting less than 0.01 percent of global greenhouse gas emissions.On that score, Dr Renganaden Padayachy reiterated Government’s engagement to act in favour of the protection of the environment and to address climate change with what he described as ambitious but achievable goals and with the help of foreign assistance. “The fact that Mauritius ambitions to decrease its greenhouse gas emissions by 40% by 2030, instead of 30%, attests to Government’s determination to act,” he emphasised.In so doing, he stated that Government aimed at investing in renewable sources of energy and increasing to 60 percent the use of renewable sources for electricity generation by 2030. He indicated that the estimated cost for the implementation of these projects was US$ 6.5 billion, among which US$ 4.5 billion would be earmarked for adaptation projects and US$ 2 billion for mitigation initiatives. He further informed that Mauritius would receive financial assistance from foreign donors amounting to US$ 4,2 billion and representing 65% of the estimated cost, while the remaining US$ 2,3 billion would be financed by other international sources. “The two agreements signed today are being extended to Mauritius from the Government of France in this context and form part of the technical support of 300 million EUR offered by the AFD in June 2020,” he added. Minister Padayachy expressed gratitude to the French Government and added that it was yet another testimony of the shared friendship, and of France’s unwavering support and trust.As for the AFD Director, he informed that the 2050 Facility aimed at enabling Mauritius to develop its pathway to allow the transition to a low-carbon and resilient development model, and to be more resilient to climate change. “Two key sectors identified as the most gas emitting ones, namely the energy and transport sectors, as well as two vulnerable sectors, that is agriculture and tourism, will be guided to elaborate a strategy,” he pointed out.“As for the second agreement,” he said, “for which EUR 1 million was granted, it will cater for the mapping of the coastal zones of Mauritius and Rodrigues to assess the risks of erosion, among others.”Ambassador Florence Caussé-Tissier, for her part, reaffirmed that acting against climate change was a top priority for the French Government, both on the national and international fronts. She observed that the AFD had consolidated its interventions and support programmes, such as capacity building and financial aids, to help countries accelerate their climate efforts.“Through the signing of the two agreements, both France and Mauritius are uniting their synergies to accelerate efforts in the fight against climate change,” she added. “We are also renewing our engagement and strengthening our rich bilateral ties with Mauritius through this ambitious cooperation to respond to this common challenge,” emphasised Mrs Florence Caussé-Tissier.
*Source Republic of Mauritius