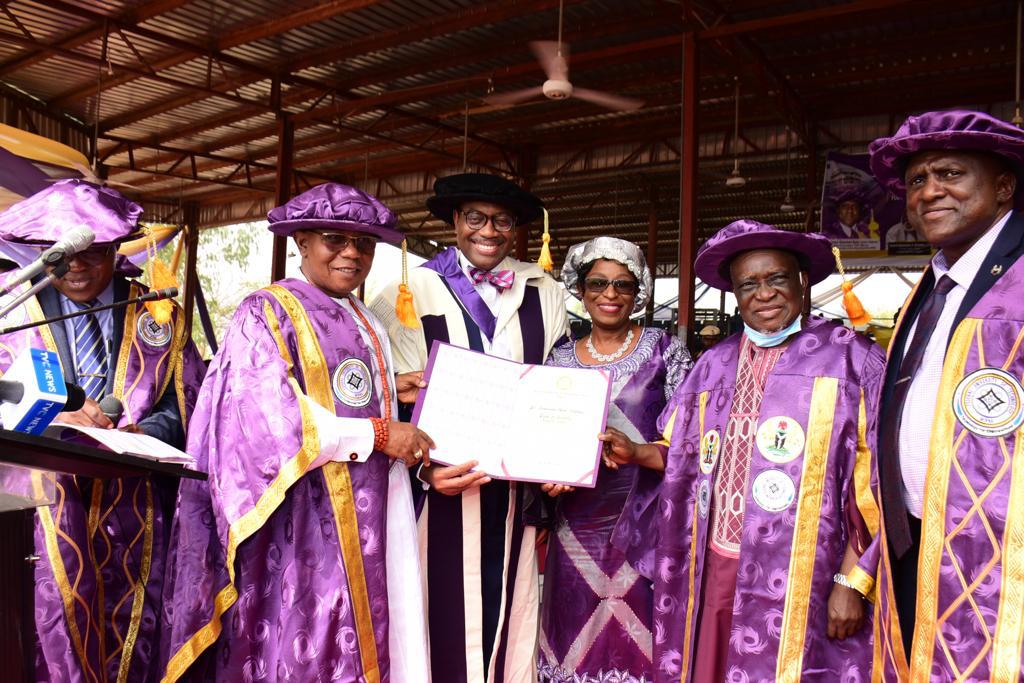 The Federal University of Technology Minna has awarded the President of the African Development Bank , Dr Akinwumi Adesina an honorary doctorate. The honor was conferred at the institution’s 38th Founders’ Day and 30th Convocation ceremony of the University, in Minna today.Adesina joined three others honorary doctoral awardees, namely former Nigerian Head of State General Abdulsalam Abubakar (GCFR), Alhaji Abdul Samad Rabiu, (CON) and Malam Mele Kolo Kyari.Adesina used the occasion to publicly acknowledge President Muhammadu Buhari, several former Heads of State, and former Vice President Atiku Abubakar for the roles they played in his election as President of the African Development Bank Group.“I am especially grateful to H.E. General Abdulsalami Abubakar, who took me under his wings and lobbied extremely hard for me when I was seeking election for President of the African Development Bank in 2015. He spoke with the then President-elect Muhammadu Buhari, who in turn provided me with strong support. He also reached out to President Goodluck Ebele Jonathan and former Vice President Atiku Abubakar to rally support behind me. You have been a key part of my success. I wish to use this time to acknowledge that publicly and thank you most sincerely. Your Excellency, I am grateful Sir.”President Buhari also strongly supported Adesina leading up to his second term re-election in September 2020.In an inspiring message to graduating students, Adesina, a former Minister of Agriculture and Rural Development, told the graduating class of 2021, that as the new success stories of Nigeria, they stood on the brink of opportunities, having been prepared for success by a university focused on technology.Adesina said: “Technology drives the world. As Minister of Agriculture, I turned to the power of technology, mobile phones, to provide 15 million farmers with access to improved seeds and fertilizers, with a view to ending corruption in the sector. It was revolutionary – the first, not only in Africa, but in the world. It helped Nigeria produce a record additional 21 million metric tons of food. It boosted food security and expanded wealth for farmers, from the northeast, northwest, north central, southwest, east, and south-south of the country. It brought transparency and accountability in use of public funds.Several Nigerian Fintech entrepreneurs are already using tech to deliver digital payment systems with three of Nigeria’s fintech (Intersswitch, Pay Pal and Flutterwave) reaching the $1 billion mark. Adesina said African Fintechs raised $1.4 billion in 2019, three times what was raised in 2019, and in 2021 they raised about $5 billion.The African Development Bank President highlighted the critical roles of technology for enhancing security systems, military reconnaissance and intelligence, satellite imagery and remote sensing to track the effects of climate change, artificial intelligence, as well as drones to deliver agricultural inputs and medical supplies to remote locations.On a humorous note, Adesina said: “Cognitive robots now power industrial manufacturing. In the very near future, due to machine learning and artificial intelligence, your colleagues in the office or industry will not be just Musa, Emeka, Yetunde, or Ada, but Yekini Jones or Bobo – the robots. They will even wear caps or head ties. Through facial recognition, Yekini and Bobo the robots will greet you every morning, saying “Hello Musa, Emeka, Yetunde, and Ada. And you will say, “Hello Yekini, Hello Bobo. Let’s roll.”The African Development Bank is preparing the youth of Africa to lead in the new digital economy. We have just provided $ 170 million to Nigeria to help drive its I-DICE initiative that will help expand the digital industry and grow jobs in the creative industries.In his concluding remarks, Adesina gave an inspirational charge to the graduates, saying: “You have been shaped in Minna, for export to other parts of Nigeria, Africa, and the world. Build a New Nigeria. A smart Nigeria. A dynamic Nigeria. A globally competitive Nigeria. It is in your hands. Now go and make it happen! I wish you good success and God’s richest blessings. Congratulations

South Africa: SA Revokes Its Intent to Withdraw From the ICC