The construction of the 770-metre long jetty, currently at 96% complete, is wholly funded by the Kenya Ports Authority (KPA). 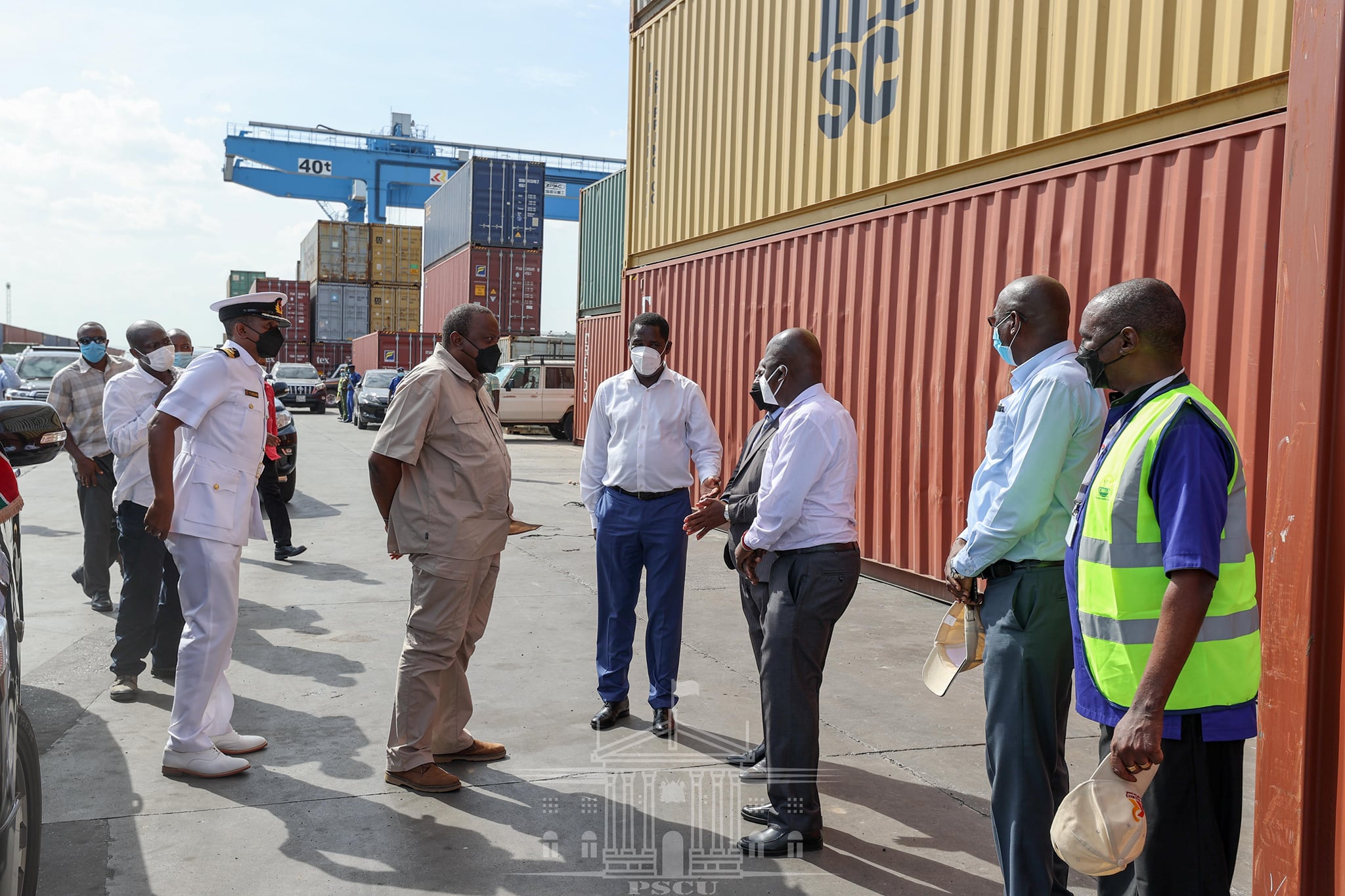 President Uhuru Kenyatta on Thursday inspected the ongoing construction of the Shs 40 billion offshore Kipevu Oil Terminal, the largest of its kind in Africa.The construction of the 770-metre long jetty, currently at 96% complete, is wholly funded by the Kenya Ports Authority (KPA) and implemented by China Communications Construction Company.When complete in April this year, the offshore facility will be able to load and offload very large sea tankers of up to 200,000 DWT carrying all categories of petroleum products including crude oil, white oils and LPG.Speaking during the inspection, President Kenyatta, who was accompanied by visiting Chinese Foreign Affairs Minister Mr Wang Yi, said the new jetty will enhance supply and ensure price stability of petroleum products in Kenya and the region by replacing the 50-year old onshore Kipevu Oil Terminal (KOT).When operational, President Kenyatta noted that the new offshore jetty will save the country in excess of Shs 2 billion annually in demurrage costs incurred by oil shippers thereby contributing to a significant reduction in fuel pump prices.“Once complete the new facility will be able to reduce not only the cost of fuel but also to ensure that Kenya is able to consistently have an adequate supply of fuel for our needs and development needs that of our people.“This terminal once commissioned in a few weeks time will result in the saving of almost Shs 2 billion that we are currently paying every year because of demurrage occasioned by the long queues of vessels parked outside our harbour waiting to discharge their product,” he said.The President hailed Kenya’s development partnership with China saying the arrangement had helped deliver key infrastructure projects, adding that the populous Asian nation was progressively opening up its expansive domestic market to Kenyan exports.“Our partnership with China is not a partnership based on China telling us what to do. It is a partnership of friends, working together to meet Kenya’s socio-economic agenda.“The old Kipevu Oil Terminal which for many years we have struggled with, was not able to meet the demands of increasing population, to meet the demands of the growing economy.“We needed this facility to be able to cater for those demands and China was there when we asked for partnership in developing it,” the President said.He added: “They were there ready to work and walk with us hand-in-hand and that indeed is what we call a friend. We do not need lectures about what we need, we need partners to help us achieve what we require”.The Head of State said the various infrastructural projects implemented with the support of China had strengthened Kenya’s economy.He noted that the Standard Gauge Railway (SGR) had kept the Kenyan economy ticking during the slowdown occasioned by the global Coronavirus pandemic.The President noted that SGR had significantly lowered the cost of cargo freight saying the price of transporting a container of tea from Nairobi to Mombasa had reduced from Shs 60,000 by road to Shs 17,000 on the modern railway line.“Many said there was no need to improve the railway linking Mombasa to Nairobi and ultimate to Kisumu, Malaba and our neighbouring countries. Today millions and millions of Kenyans have benefited through the reduction in cost of travel between Nairobi and Mombasa.“During this Covid-19 period thousands of Kenyans were able to take advantage of the SGR to travel to Mombasa and to ensure that atleast our hotels down here were not closed and our people were kept in employment,” President Kenyatta said.Earlier at State House, Mombasa, President Kenyatta met visiting State Counsellor and Minister for Foreign Affairs of the People’s Republic of China Mr Wang Yi who paid him a courtesy visit.The Head of State and the Chinese Minister discussed a wide array of bilateral and multilateral subjects of mutual interest to Kenya and China among them the two countries development cooperation framework, regional peace and security as well as the global fight against Covid-19.The President reiterated Kenya’s commitment to its development partnership with China saying the cooperation had contributed greatly to the country’s transformation in recent years.“Let me say as a country we strongly value the partnership between our two countries. Our political cooperation, our economic cooperation, our cultural engagement is something that we value and something that we look forward to deepening as we move forward.“Kenya I can clearly say would not have been able to achieve many of our social economic development agendas without the support of China. And this is something that not only we as a government appreciate but also the people of Kenya appreciate,” the President said.He expressed optimism that the continued opening up of the Chinese domestic market to Kenyan agricultural exports will help bridge the huge balance of trade gap that exists between the two economies.“I am very appreciative especially as a farmer, on the movement we are making towards the opening up of market in China to Kenya’s agricultural products, am very keen myself to see that develop because the basis of success is if we are able to balance our trade,” President Kenyatta said.Minister Wang Yi, who was accompanied by Qian Keming (Vice Minister, Minister of Commerce), Wu Jianghao (Assistant Minister, Ministry of Foreign Affairs) and his country’s Ambassador to Kenya Zhou Pingjiang assured President Kenyatta of China’s continued commitment to supporting Kenya’s development agenda.Cabinet Secretaries Raychelle Omamo (Foreign Affairs), Joe Mucheru (ICT), Ukur Yatani (National Treasury), John Munyes (Petroleum), James Macharia (Infrastructure), Peter Munya (Agriculture), Mutahi Kagwe (Health) and Betty Maina (Trade) attended the State House, Mombasa meeting.Others were Principal Secretaries Macharia Kamau (Foreign Affairs), Kirimi Kaberia (Industrialization) and Johnson Weru (Trade) as well as Comptroller of State House Mr Kinuthia Mbugua among other Senior Government officials.
*Source Presidency of the Republic of Kenya

Mauritius - COVID-19: Pfizer Booster Dose to be administered to those aged over 40

The International Day for the Elimination of Violence Against Women

WHO reviewing impact of US funding withdrawal amid COVID-19 pandemic