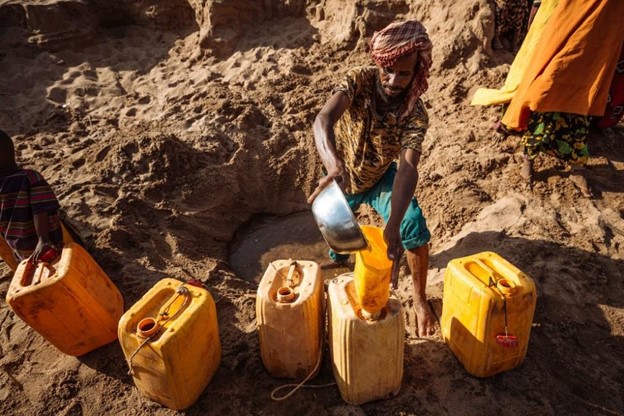 Deteriorating drought conditions in Somalia could displace over 1 million people by April if urgent action is not taken, the International Organization for Migration’s (IOM) latest Displacement Tracking Matrix (DTM) analysis shows. The widespread drought in the Horn of Africa has severely impacted Somalia the most, prompting the government to declare a state of emergency in November. Water scarcity is the worst in 40 years in some parts of the country and boreholes and shallow wells are running dry. Livestock is dying, and prices of essential food commodities are unaffordable for most people. More than 3.2 million people are affected, including nearly 245,000 people forced to abandon their homes in search of food, water and pasture, especially in the central and southern regions of the country. The conditions will likely worsen as Somalia faces the risk of a fourth consecutive failed rainy season from April to June. Based on the current drought severity and an analysis of previous drought-related data from 2017, the DTM report predicts two potential displacement scenarios. The first estimates 1,415,000 people might be displaced in the next six months, while the second estimates the displacement of 1,036,000 for the same period. Affected communities require urgent assistance, especially Internally Displaced Persons (IDPs) and migrants who continue to face precarious living conditions and a lack of services in informal sites and settlements across the country. There are an estimated 2.9 million IDPs in Somalia. “If we act now, we can mitigate further displacement,” said Mohamed Abdelazim, IOM Somalia Emergency Coordinator. “Immediate action is critical to save lives and livelihoods and avoid greater needs in the future.”  In Somalia, drought conditions have historically created friction over grazing areas and water sources, increasing conflict and the number of people forced to move. IOM is working closely with the government, UN agencies and local partners to address the acute water needs of IDPs, migrants, and vulnerable groups. Water trucking, distribution of hygiene kits, and construction of boreholes and shallow wells are underway across 103 locations. These efforts aim to prevent a humanitarian disaster that would exacerbate significant existing needs driven by ongoing conflict and additional climate change impacts. The ongoing intervention is expected to reach 255,000 people by the end of March.  As the drought worsens, IOM is appealing for more funds to expand its water, health, protection, camp management, shelter, and non-food items support. Based on previous drought displacement patterns in Somalia, affected populations are likely to move from rural to urban centres, increasing the pressure in areas that are already hosting large numbers of IDPs and where services are scarce. “We are focused on assisting communities where they reside or in smaller towns near their place of origin, while simultaneously upscaling preparedness activities in major urban centres,” said Abdelazim. “Further displacement into major cities will overwhelm critical services such as health care, leading to disease outbreaks and other major concerns related to lack of services.” Through its response, IOM also aims to reach communities whose livestock is critical for agricultural value chains. This can contribute to reducing food insecurity, conflict over natural resources, and forced displacement. IOM’s Global Crisis Response Platform provides an overview of IOM’s planned activities and funding requirements to respond to the evolving needs and aspirations of those impacted by, or at risk of, crisis and displacement. Click to view the 2022 Crisis Response Plan for Somalia.
*Source International Organization for Migration (IOM)