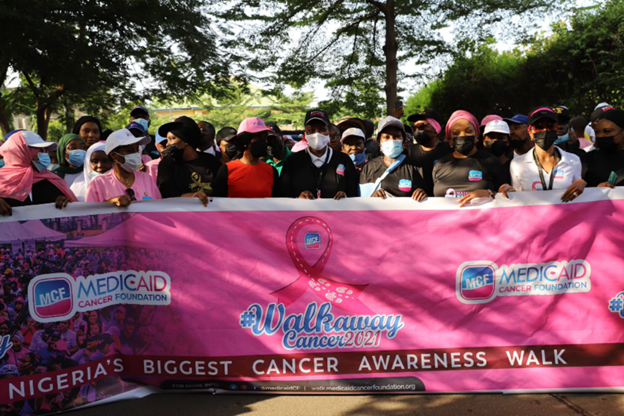 I learnt about cervical cancer and people dying from the disease while carrying out my duty as a journalist. I never took time to know my status until October 2021, when an expert reiterated that early detection is key to surviving any form of cancer”, says Adenike Tambe, a health journalist living in Abuja. Miss Tambe took advantage of the price discount for cancer testing conducted by Medicaid cancer foundation (Non-Governmental Organization) as part of their activities to raise awareness against cancer.When I heard of the discount, I decided to screen for cervical cancer. My result came out negative, and I received the first dose of the Human Papillomavirus (HPV) vaccine. Women should carry out the test, she said. Miss Tambe is an example of how awareness creation efforts could spur individuals to take action to protect themselves and the barriers faced by millions of Nigerians in accessing preventive interventions against cancers, especially cervical cancer. With an estimated 12 075 cervical cancer cases and 7 968 deaths recorded in Nigeria annually, the First Ladies of States, under the auspices of First Ladies Against Cancer (FLAC), has responded to the World Health Organization’s (WHO) call for action in the global plans to eliminate cervical cancer.The World Health Organization hopes to eliminate cervical cancer as a public health problem by 2030.With increasing cases of cervical cancer becoming a thing of worry globally, the wife of the Kebbi State Governor, Dr Zainab Shinkafi-Bagudu, has been using her office to call for bold action to ensure that her state achieves the strategy 90-70-90 target.Dr Shinkafi-Bagudu through her Non-Governmental Organization (Medicaid Cancer Foundation), has been leading advocacy for the inclusion of cancer screening and treatment in the benefits package of the National Health Insurance Scheme (NHIS), raising awareness about cancers, including annual cancer walk and leading the advocacy for nationwide vaccination of girls with the HPV vaccine. She also champions early detection, improving the chances of successful treatment and creating awareness against the deadly disease.“We saw the rationale behind the call by WHO to eliminate Cervical cancer and align with it. In Kebbi State, with several advocacies and activities, many traditional rulers are now champions of cervical cancer. We supported community-based organizations to carry out over a hundred and fifty outreach events reaching the 21 local government areas in the state. These outreaches reached over 26,000 women in the 12-month”, she said.To achieve the transformative actions that will accelerate the elimination of cervical cancer, Dr Shinkafi-Bagudu, appealed for the inclusion of HPV vaccination in the national routine immunization schedule. She said delivering the 2030 objectives will require actions more than platitudes. She called for high-income countries to prioritize access to HPV vaccines for adolescent girls in low and middle-income countries.Cervical cancer is a preventable and treatable disease. Yet, Nigeria has one of the highest numbers of cases worldwide; cervical cancer is the second most common cancer in women in Nigeria.Towards that end, the WHO provides catalytic support to 3 states in Nigeria, Kebbi, Niger and Ondo state for Cervical cancer screening and treatment. The plan is to screen at least 15000 women in the first phase of the program. With support from WHO and Clinton Health Access Initiative (CHAI), the first ladies of Kebbi, Niger, and Ondo states are leading the implementation of cervical cancer screening and treatment in the states.Emphasizing the importance of aligning with the strategy, the WHO Country Representative (WR), Walter Kazadi Mulombo, said the support to the states is part of WHO’s efforts to ensure Nigeria joins the rest of the world on the WHO Global cervical cancer elimination agenda.In his remark during the 2021 International Cancer week, Dr Kazadi Mulombo commended the government, especially FLAC, for supporting various cervical cancer elimination initiatives in their respective states.He also assured Nigeria of WHO’s continual support towards eliminating cervical cancer.“WHO is supporting the Federal Ministry of Health to conduct a national survey on the prevalence and risk factors of NCDs (NCD STEPS Survey) and prevalence of tobacco use.“This survey will give the latest data on NCDs and their risk factors for evidence-based interventions to curb the modifiable risk factors of cancers, he said.
*Source World Health Organization (WHO) – Nigeria