President Adama Barrow has renewed his pledge to transform The Gambia Armed Forces (GAF) into a professional force that conforms to international standards. For the President, the military is an integral part of his development agenda for the country.

President Barrow was presiding over the promotion and decoration of 39 officers from The Gambia Armed Forces at a ceremony held at the State House. 36 of them are from rank of Captain to Major, whilst the rest from Major to the Lieutenant Colonels. The officers were reported to have gone through examination and only those who passed were deemed deserving of the promotion.

In the past, promotions in The Gambia Armed Forces were not based on merit but on subjective considerations that favoured some sections of the Army whilst delineating many deserving ones.  With the instituted Security Sector Reform (SSR) agenda of the Barrow government, however, this has already changed.

“I assure you that we will not relent until we have a professional and very well motivated Army that can match other armies around the world. I am aware of the efforts being undertaken to set up a military academy here. This is one of the best drivers towards achieving our Security Sector Reform,” he told the promoted officers, who were led to the State House by their Chief of Defense Staff (CDS), the Commander of the National Army and the Navy Commander, respectively.

President Barrow further assured them that government will continue to collaborate and provide support to the relevant stakeholders in order to move the national Security Sector Reform agenda forward – an important element of which is to have a vibrant, effective and legitimate Armed Forces that is transparent, subordinate and accountable to civilian authority; a Force that is responsive to the needs and aspirations of the people; and, a Force whose actions are firmly rooted within the rule of law and international standards.

In the quest to build a professional Force, President Barrow said his government recognised the importance of capacity building.  It has engaged international partners for training assistance. As a result, members of The Gambia Armed Forces are now benefiting from various training opportunities across the world. This will contribute to improving the competence of the members of the Armed Forces. 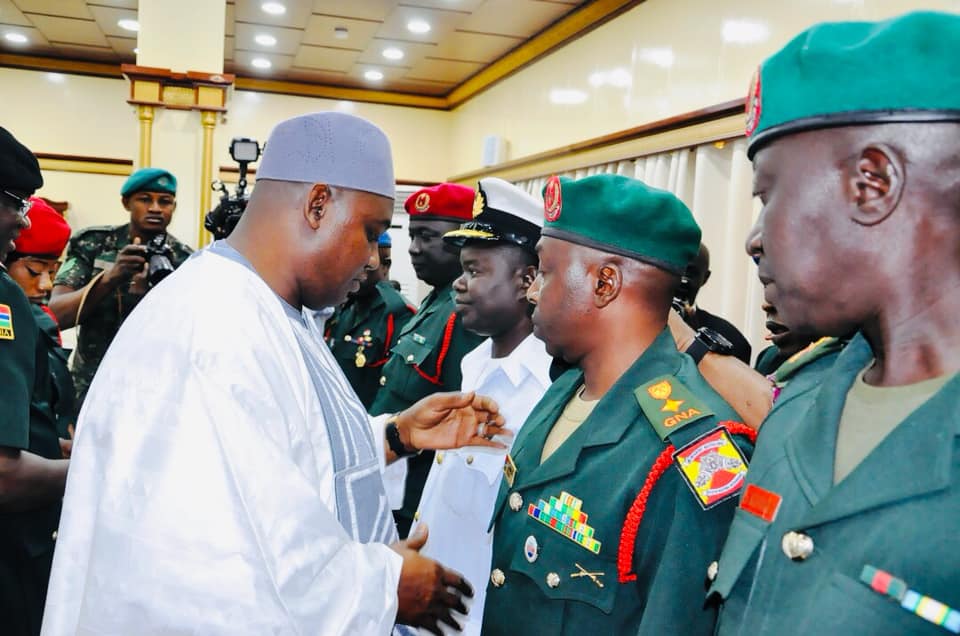 Those promoted come from different disciplines of the Armed Forces, ranging from civil, marine and aeronautical engineering, health, IT, infantry, to intelligence, among several others. The Officers took the oaths of service, secrecy, and loyalty to authority, state and the people.

Chief of Defense Staff, Lt. Gen. Massaneh Kinteh, in his statement recalled that since President Barrow assumed office, he had always maintained having a professional army devoid of politics and tribalism. When he was appointed CDS, Gen. Kinteh also recalled he assigned to lead the transformation of the Gambian Army into a professional and well-motivated force that is free from political interference

CDS Kinteh said the promotions are consistent with the needs of the Armed Forces and the security sector reform agenda of the government, noting that they comprise a corps of leaders that the Army needed in achieving the transformation objectives.