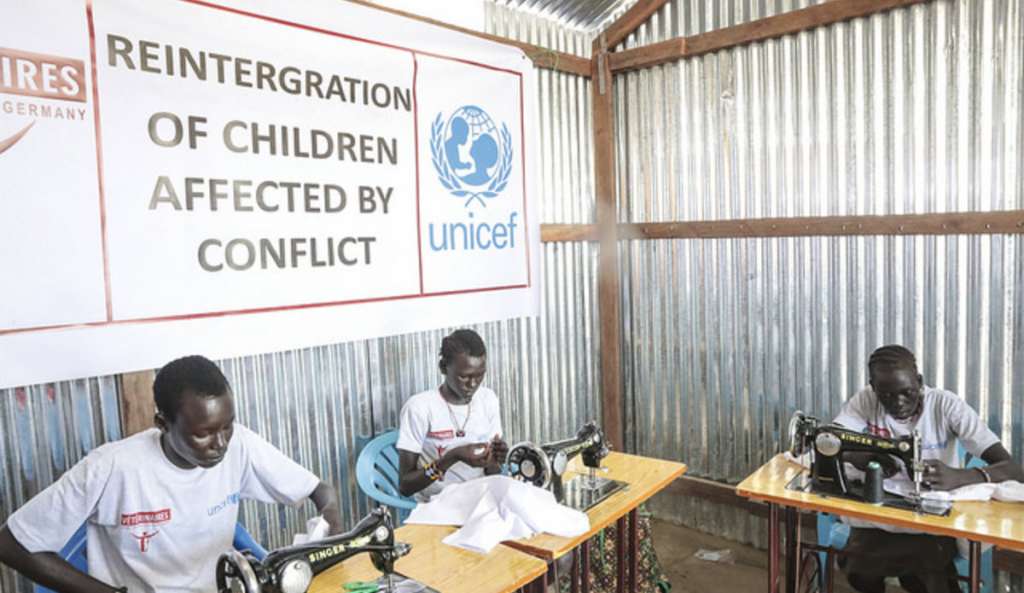 Juba – the United Nations Council Working Group urges South Sudan to address a children crisis, calls for much greater accountability and effort to prevent grave violations against children across the world youngest nation.

“The conflict in South Sudan has had a devastating effect on the children in the country and has left deep scars in the next generation,” he said. The Revitalized Peace Agreement represents an opportunity to turn a corner and make the protection of children a priority as the country moves forward.

At a press conference in the capital Juba on Wednesday, Ambassador Skoog urged the country’s leaders to continue to release and reintegrate child soldiers into the community but acknowledged that further support is needed for this process.

“Any child that has a real choice would never join in any armed conflict. That is a given,” said Ambassador Skoog. “Unfortunately, the circumstances in South Sudan and elsewhere, have forced children into the armed conflict for economic reasons, or for being pressured in or abducted, kidnapped and forced in. Regardless of the reasons, for any child to have joined the armed forces, they are victims, always.”

He urged the country’s leaders to continue to release and reintegrate child soldiers into the community but acknowledged that further support is needed for this process.

“There is also a need for a solid investment in social, economic development, schools, health care services, and protection also outside the armed conflict. The presence of justice and police are an important aspect of this,” he said. “I understand that there is a capacity issue. But it is my hope that, as the country hopefully moves away from conflict into peace, the investments that have been made by the United Nations and the Government when it comes to humanitarian emergency relief can be shifted into more resilience, development, social and economic investments.”

The Security Council has officially cited “six grave violations”: Recruitment and use of children by parties to the conflict; rape and other forms of sexual violence; attacks on schools and hospitals; abduction of children; and denial of humanitarian access.

The Working Group also had the chance to visit reintegration programmes including vocational centers for children previously recruited or used by parties to conflict in Pibor and Bor as well as to engage with the Co-Chairs of the United Nations Country Task Force for Monitoring and Reporting (CTFMR) – UNMISS and UNICEF – with other UN representatives, international and local NGOs, faith-based organizations and with the diplomatic community through the Group of Friends of Children and Armed Conflict in Juba.

In spite of that, the Working Group said the newly signed peace agreement will provide a fresh chance for political leaders to improve the situation for children.

“I believe that the peace agreement in its revitalized form is an opportunity to turn the corner and to move forward when it comes to really and truly protecting the interests of the children of South Sudan,” said Ambassador Skoog.

The Working Group delegations were able to see a first-hand the immense challenges faced by the child protection actors working in the conflict-affected area to meet the reintegration needs of the many children released, including psycho-social support and programmes that address the specific needs of girls and boys.  These challenges were reiterated in conversations with international and national NGOs as well as with faith-based organizations, who urged the Government and the international community to place children, as the future of the country, at the heart of the peace process and invest in reintegration and education.

“I want to say that we all know that the children of South Sudan have suffered tremendously from the armed conflict over the years. In many ways, they have been the main victims of armed conflict and that is, of course, serious for each child but it is also serious for South Sudan as it moves forward because it is a dent in the future of the country. I believe that the peace agreement in its revitalized form is an opportunity to turn the corner and to move forward when it comes to really and truly protecting the interests of the children of South Sudan. And that is the message that I have been passing on in all my meetings here on behalf of the Working Group,” Ambassador Skoog said.

More so, the Working Group has also recommended the criminalization of the six grave violations against children as part of an upcoming review of the Penal Code and the enhancement of accountability measures in South Sudan.

Government troops, together with forces loyal to senior politicians, Riek Machar, and Taban Deng, were cited as UN-verified violating parties in the 2017 Annual Report on Children and Armed Conflict in South Sudan.

In light of the signed revitalized peace agreement, aimed to end a five years old conflict which has killed hundred thousand of people and has displaced 2.5 million of people from their homes, then ravaged the country, more children are expected to be released from the armed groups in the coming months.

The Working Group has the mandate to work with issues relating to children and how they are affected by armed conflict. It is made up of all the members of the Security Council.

President Emmerson Mnangagwa Hails Value For Money Audit to Stamp Out Corruption And Lift The Economy.