Nigerian President Muhammadu Buhari launched his manifesto on Sunday, hoping his anti-corruption agenda
will be enough to win him a second term at the general election next year.

Buhari, a military ruler in the early 1980s, in 2015 became the first opposition candidate to oust an incumbent
president through the ballot box.

His focus on corruption may be offset by Nigeria’s slow growth. The country emerged from its first recession in
a quarter of a century – largely caused by low crude prices – last year.

In his first term, Buhari ordered government revenues and funds recovered in corruption investigations to be
placed in a central bank account known as the Treasury Single Account (TSA).

That had protected government coffers from corruption when oil receipts – which make up two-thirds of
revenues – were low, he said.

“We are committed to deepening the work we started thisfirst term such that the nation’s assets and resources
continue to be organised and utilised to do good for the common man,” he said at the manifesto launch. 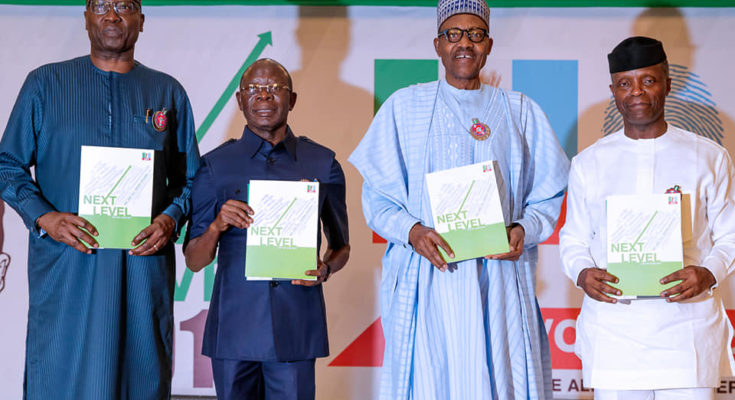 Buhari said Nigeria had a chance to make “a break from its tainted past which favoured an opportunistic few”.
Despite the president’s focus on tackling corruption, there have not been any significant convictions related to
graft in his first term. The main opposition party has accused Buhari of focusing on its members, which the
presidency denies.

“If the state of the average Nigerian has not improved in the last three and a half years, more of the same is
obviously not what they need,” it said in an emailed statement.
Abubakar is expected to unveil his policy plans on Monday.

The president set education as a policy priority, vowing to overhaul buildings and subjects taught at 10,000
schools in each year of the four-year term, and retrain teachers to focus on science, technology and mathematics.
He said there was “scope for over 15 million new jobs” by expanding a nationwide vocational skills programme
and improving access to credit for entrepreneurs and artisans.