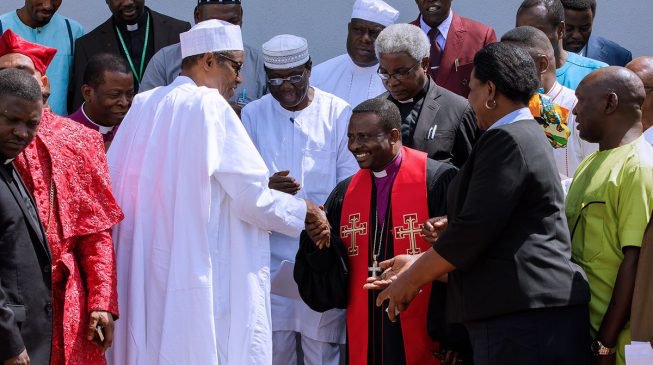 The Christian Association of Nigeria says the All Progressives Congress (APC) is becoming a safe haven for corrupt politicians.

CAN stated this during a meeting with President Muhammadu Buhari at the presidential villa, Abuja on Friday.

The visit was led by Samson Ayodele, president of CAN.

The Christian body said Buhari must clear the negative impression that the anti-corruption war was targeted at people that are not members of the All Progressives Congress (APC).

The association advised the president to make the war against corruption total and non-discriminatory in order to rid the nation of the “corruption cancer that has eaten deep into her fabrics”.

The association, however, commended the implementation of the treasury single account (TSA) and the bank verification number (BVN), saying it had led to the recovery of some looted funds.

“Like we categorically noted here during our last visit, the wish of the people is for the war against corruption to be total and without discrimination. Not a few believe that the ruling party is becoming a safe haven to some corrupt politicians in their bid to escape the trap of the Economic and Financial Crimes Commission,” CAN said.

“CAN commends your boldness and courage in implementing the BVN and the treasury single account (TSA) system. There is no doubt that the two policies have greatly helped in sanitising the system.”

On the general election, CAN asked Buhari to improve on the credibility of the 2015 polls by ensuring a free and fair electoral process.

It urged Buhari to give a presidential order directing the police and other security agencies to be non-partisan during the elections.

“A presidential order to the police and other security agencies to be non-partisan, neutral and apolitical in the coming general elections, with a view to securing international respect and honour for our country in the comity of nations,” it said.

“We believe that the survival and peace of Nigeria are greater than the ambition of any politician.

“We again request that your administration conducts free and fair election that will add to the accolades the country received from the conduct of the 2015 elections that brought you to power.”