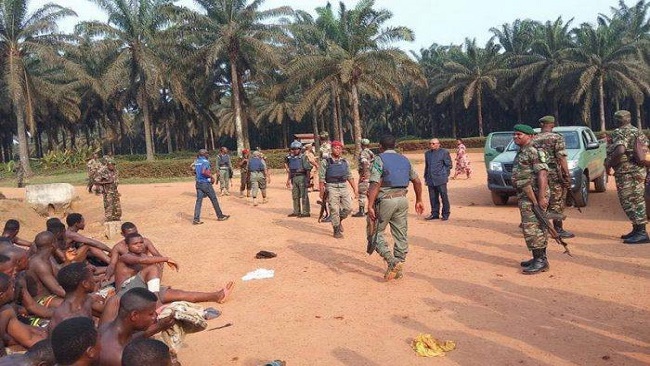 In early April 2018, I decided to visit Cameroon to enliven my family bond through face to face contact. I knew this was risky. Friends and family cautioned me, warning about the insecurity and war in the country. I have been to Cameroon two times ever since Anglophone Cameroonians took a bold step in late 2016 to openly talk about their oppression. Increasingly, the crisis has escalated and we now witness a full-scale war against the people, a form or punishment, meted on Anglophones by the Cameroon government.  Anyone familiar with the political developments in Cameroon is not surprised that Anglophones are fighting against what they see as occupational forces of La Republique du Cameroun (LRC). As an Anglophone Cameroonian, albeit with roots on the Francophone side, I find it is hard not to write about the marginalization we have experienced all our lives in country where we are made to understand we are undeserving citizens.

My name is Solomon Ngu . I migrated to Europe and eventually to USA at the turn of the 21st century. Like most Anglophone Cameroonians, I left the country in search for a better life abroad. Over the years, I have witnessed and researched the ways in which young Anglophone Cameroonians navigate through hard life in the country. Just as our generation at the turn of the 21st century, most of these young men and women paint a gloomy picture of life in Cameroon; they believe a better future awaits them out of their country. That the migrants constitute a heavy weight in the war and are the most vocal anti-LRC citizens is a point I turn to later.

This is an introduction to a series of articles that I will publish on Pan African Visions. The articles are ethnographic notes that bear testimony about the ongoing war in Ambazonia/Southern Cameroons. I will report on what I heard and saw in the urban areas as well as first-hand accounts from villagers who have escaped the villages to the towns. As of the time of writing this introduction, most of the fighting is concentrated in the villages all over Ambazonia. Villagers’ testimonies and the fact that they have left the rural communities to seek safety in the urban areas tell that there is a nasty war going on. In fact, Achille Mbembe, a Cameroon philosopher and human rights activist, says on Facebook that this is a ‘dirty war’, a description reminiscent of Argentinean state terrorism of the 1970s where thousands of people simply disappeared.

It is in fact a dirty war, a war that was totally avoidable had leadership taken into account the humanity of those who live in Ambazonia. The war is described as ‘nasty’ or ‘dirty’ primarily because of the meanness with which it is conducted. Take for example, the military burning down entire villages and properties, torture of civilians and the looting. As to how civilians and their properties – cattle, pets, farms, houses, shops, etc, provoke the soldiers is still unknown but what we know is that the rampaging soldiers’ actions are informed by a belief that they are dealing with people who are less humans, the monsters and aliens. So far, the villagers caught between the government troops and those fighting to restore the dignity of South Cameroons are paying the highest prize. It is a topic I turn to in one of the articles.

Before leaving Cameroon, I had a feeling that this was the last time I saw Ambazonia the way I know it; that is before a full-scale war engulfs the urban areas. Civilians in the major cities of Buea, Limbe, Bamenda and Kumba were making plans on where to escape to should the war reach their city. As I write, there are reports of people fleeing Buea en masse; they want to avoid what they foresee as potential confrontation between the Amba fighters and the Cameroonian army on the 20th of May, a day designated as the National Day.  The 20th of May is significant in that on that day in 1972, many legacies of Anglophone Cameroon were erased; it was a day the name of the country changed from the Federal to a United Republic of Cameroon. Much could be written about this but it suffices at this level to say those fighting to restore the independence of Anglophone Cameroon, do not want 20th May to be designated as Ambazonian National Day. Going by history, they see 1st Oct, as their day of independence – and rightfully so, for Anglophone Cameroon gained independence on this day in 1961. Recall that the conflict in this section of Cameroon escalated after the government massacred citizens who were out celebrating their independence on Oct 1st 2017.

I presume anyone reading this introduction and subsequent articles must be familiar with Cameroon – its colonial and postcolonial history. A very short version of this history is: Cameroon was a creation of Germany in late 19th century. Following the defeat of Germany in WWI, France occupied the eastern part of the country. The western part was colonized and governed alongside Nigeria by the British. The two parts evolved differently in socioeconomic and political spheres. The French governed their section of the country in the most colonially-belligerent manner imaginable; a type of French colonialism eloquently described in Franz Fanon’s works. French repression led to many Francophone political activists seeking asylum in the English part where governance was in the hands of the indigenes. East and West Cameroon reunited and formed a federation in early 1960s as equal states.

Over the years, the Anglophone legacy was erased such that by the mid-1980s, the country became known as La Republique Du Cameroun, a name Francophone Cameroon acquired at independence on January 1st 1960. The Francophonization of Cameroon has been resisted by Anglophone both openly and privately. As time progressed, the resistance was very much limited within the circle of the elite. In fact, the informed Anglophone elite couldn’t transmit the processes and forms of marginalization to the ordinary citizens but the situation was to change through the use of new media technologies during and post 2016 massive uprising. Thanks to social media, and more especially, the Smartphone, information about the marginalization, distorted history and police torture of peaceful protesters was readily circulated among Anglophone Cameroonians. This further fueled the conflict, emboldening young people to go to the street. Some of the articles in this blog focus on how social media is transforming the course of the conflict.

I will leave the reader here. My ethnographic notes will start appearing soon on this blog.