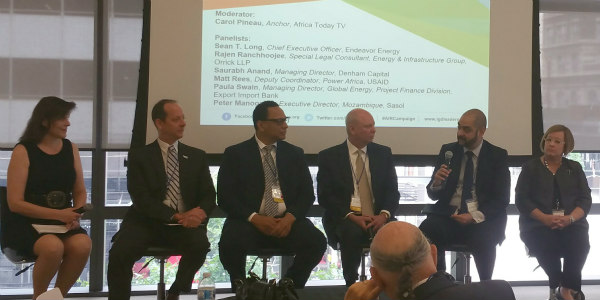 Access to power is an essential driver of sustainable economic growth and development progress in Africa. Opportunities abound for public-private sector partnership and investment to expand access to electricity across the African continent.

The Initiative for Global Development (IGD) launched its Houston roadshow stop on April 30, to boost U.S.-Africa trade and investment in the power and energy sectors and match U.S. and African investors and private sector leaders to expand greater access to reliable electricity on the continent.

The Houston roadshow stop, which was held on April 30 and May 1, was the final stop of IGD’s four-city inaugural U.S. roadshow tour, “Africa Investment Rising: Building Momentum for Investing in Africa’s Economic Prosperity”. The U.S. Roadshow Tour, which took place from April 18-May 1, was aimed at re-shaping perceptions on doing business in Africa by bringing trade and investment opportunities to U.S. companies and forging stronger connections between U.S. and African business leaders in key growth sectors.

Launched on April 18 in Washington, D.C., the roadshow traveled from New York City for banking, finance, and investment to Des Moines, IA for agribusiness and agro-industry and then Houston, TX for power and energy.

Some 600 million people in sub-Saharan Africa or two-thirds of the region’s population are still living without access to reliable power. Without access to power, Africa’s global competitiveness and economic growth will continue to lag behind other regions of the world.

The two-day roadshow stop brought together investors, African and global private sector leaders and policymakers to discuss investment opportunities in power and energy in order to maximize Africa’s energy potential for sustainable and inclusive growth.

The opening session of the Houston roadshow stop took place at Orrick, Herrington & Sutcliffe LLP, where Robert Mosbacher Jr., Board Chairman of IGD and Mosbacher Energy Company, spoke about IGD’s founding partnership with Power Africa and work on business opportunities in the power and energy sectors.

Blake H. Winburne, Partner and Co-Head of the Global Energy and Infrastructure Group at Orrick, spoke about his practice, where lawyers in the Group are dedicated to working on energy projects in Africa. “We are extremely interested in developing markets, especially in Africa,” said Winburne. Orrick, a Frontier Leader, was the host partner for the Houston roadshow stop.

A panel of U.S. and African private sector leaders convened for an energy-focused investor roundtable aimed at finding the right energy mix to accelerate electrifying the African continent.

The potential for “leapfrogging” in Africa’s energy sector to bypass conventional energy development by adopting efficient and renewable technologies was discussed by panelists.

Finding the right energy mix on the continent requires building strong public-private partnerships and being “technology agnostic,” said Rees of Power Africa. “We need to ask governments to do a better job with energy diplomacy.”

Given the high cost of electricity generation in Africa, Long of Endeavor Energy recommended that African countries need to develop sustainable off-grid solutions that combine technological innovation with finance to accelerate power projects.

“Africa can shape the future,” asserted Ranchhoojee of Orrick, saying there are tremendous opportunities for African countries to chart their own path and take a multi-pronged approach to power generation. “The ‘textbook’ has not been written yet and it is now possible to write that textbook,” he said about the opportunity for African governments to leverage a hybrid approach to electrifying the continent.

Infrastructure was cited as a major challenge to a rapid development of Africa’s power supply. Peter Manoogian, Sasol’s Executive Director for Mozambique, acknowledged that the lack of infrastructure in Mozambique has contributed to the high cost of implementing projects in a former war torn country. Yet, since Sasol expanded its market beyond South Africa into Mozambique, the country has become a fast-growing economy and the company’s production and market for oil and gas has grown over time. Sasol has invested in a major gas-to-power plant to help meet the electricity demand in the southern African country.

Financing power projects was highlighted as another impediment to the fast delivery of power generation. aula Swain, Managing Director for Global Energy in the Export Import Bank’s Project Finance division stressed the importance of mobilizing lenders, bankers, and actors to finance projects. “It takes everyone to get the deal done,” said Swain.

After the roundtable, Pamela Ward, Regional Senior Commercial Officer of Sub-Saharan Africa at the U.S. Department of Commerce, forecasts that East Africa will be one of the fastest growing regions. “Power is the energy that drives economic growth,” said Ward. She also expressed her optimism for the impact that the Continental Free Trade Area (AfCFTA) will have on intra-Africa trade. In late-March, some 44 African countries signed one of the world’s largest free-trade agreements that creates a single continental market for goods and services across the continent.

The U.S. roadshow tour’s closing reception was held at the historic Houston Club, where IGD President and CEO Dr. Mima Nedelcovych offered brief remarks. The evening reception, sponsored by Sasol, helped to set the course for strengthening U.S.-Africa business, trade, and investment relations. Nedelcovych mentioned that Sasol is also a major investor in the United States, noting that the South African-based company made a $11 billion investment in the energy sector in the U.S.

The final day of the roadshow featured an exclusive site visit to the Eaton Experience Center in Houston. The IGD team and USAID personnel participated in an interactive tour of the power management company’s hands-on facility and learned about their reliable, efficient, safe, environmentally-friendly  technologies that manage and control power at various levels.

Herman Fletcher, Eaton’s Vice President of Commercial Business Development, gave a brief presentation on Eaton’s micro-grids, which serve as a resilient, cost-effective solution to the high cost of electricity and improve the reliability of energy supply.

Eaton has a 91-year relationship with Africa and has hav five African offices in South Africa, Morocco, Nigeria, Côte d’Ivoire, and Kenya and distribute widely throughout the continent. Eaton officially signed on as a Power Africa partner in October 2017, and are actively seeking a stronger presence in Africa. “Our CEO has made it clear that he wants to expand in Africa,” said Fletcher.