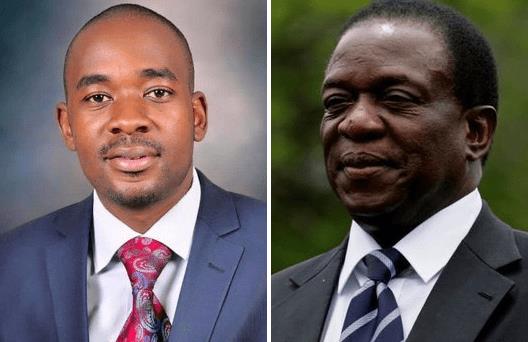 For avid sports lovers especially football, there are certain games labelled as classic tales of a game of two halves. What this implies is that team A dominated the first half of the match while team B took matters into its own hand and dominated the second half. In Zimbabwe, something of the similar nature is happening albeit not in the sporting arena but in the political field.

On one hand is the incumbent, Emmerson Mnangagwa who took over power from long-time leader Robert Mugabe in November 2017 with the help of the military. On the other hand is the youthful main opposition party leader Nelson Chamisa. Though Zimbabwe has 108 political parties, it is these two who are the leading contenders for the 2018 presidential elections.

6 months ago, most Zimbabweans across the political divide consciously and subconsciously thought there were two names guaranteed to be on the ballot paper come the presidential election in 2018. The first name is that of Robert Mugabe, the man who was Zimbabwe’s only president since the attainment of independence in 1980. Despite his age, his party had already chosen him to be the presidential candidate. The second name which was expected to be on the ballot was that of Morgan Tsvangirai (now late), the leader of the MDC-T. However, as fate would have it, none will be competing as Mugabe was deposed by his party with the aid of the military while Tsvangirai succumbed to colon cancer on Valentine’s Day.

The unfortunate events which led to Mugabe’s ouster and the death of Tsvangirai opened the path for Emmerson Mnangagwa and Nelson Chamisa. From the outset, it was clear what the main talking issue would be come election time between these two i.e. the question of age with 75-year-old Mnangagwa battling with 40-year-old Chamisa. That has indeed turned out to be true especially on the part of Chamisa who has used the age question at most of his rallies. However, this is just about the only thing these two ‘share’ when it comes to their election campaigns. Everything else is water and oil as we shall see below.

Starting with the incumbent Emmerson Mnangagwa who has come out on several occasions saying that his party has not started campaigns, something hard to believe considering that there are already branded cars with his face and campaign billboards all over the major highways.

Mnangagwa’s attention is focused fully on the international front. That is where he is carrying the “Zimbabwe is Open for Business” mantra and charming the international community. The recent visits to Zimbabwe by top UK, US, and Russia envoys suggests that his international offensive charm is working. More so when one considers the fact that he has already been invited to attend high-level meetings such as the World Economic Forum and the Commonwealth Head of States summit as an observer further solidifies the notion that he is scoring important points in the international sphere. With the knowledge of how he came into power, Mnangagwa knows that what he needs most come election time is legitimacy more than anything else and this legitimacy is bestowed upon him by the international community if he wins.

On the local front, Mnangagwa is keeping low-key in terms of holding rallies at this point. However, he is taking calculated steps in how he disseminates his campaign rhetoric. One of such is the talk that the economy is more important than politics right now for Zimbabwe. If anything is to go by especially when analysing social media platforms, this talk of prioritising the economy over politics is gaining him much support with the elite and middle class. The elite wants a good economy for the flourishing of business while the middle class who are striving for better living conditions also prefer an economic bloom over political scores.

Mnangagwa while stating the importance of the economy has also used the sanctions issue to further his cause albeit without actually coming out and saying the word openly. The MDC Alliance’s visit to the US has been used by Mnangagwa via state media to paint the picture that the MDC went there to persuade the US government to keep in place the economic sanctions on Zimbabwe. With most ordinary Zimbabweans bearing the brunt of the sanctions, this has painted the MDC principals as the devils trying to hold the country at ransom till they get into power.

Mnangagwa is also portraying himself as a reformed and considerate man. First, he gave Tsvangirai a state funeral when he died, something which would have been unthinkable in the Mugabe era. He followed this by assisting the Tsvangirai family following the death of Tsvangirai’s sister, Miriro. He has also pledged to pay the university tuition fees for Tsvangirai’s daughter and help the family get a farm. All these gestures are painting Mnangagwa as a changed man and it portraying Chamisa and the MDC-T in a bad way in that they have seized to think about the man who made the party what it is today.

Generational Consensus: Time to let the young take the lead

The leader of the MDC-T party and the MDC Alliance, Nelson Chamisa is taking a totally different route with his campaign so far in comparison to Mnangagwa. On the international front, he is keeping low key. The visit to the US in December 2017 was the last he had before his recent visit to South Africa where he met scores of Zimbabweans working in South Africa.

However, though keeping low key internationally, it is at home that Chamisa has been making huge strides conducting nationwide rallies purportedly as a way of introducing the MDC Alliance principals to the electorate. Chamisa’s rallies have seen him tour most parts of Zimbabwe from the south to the north.

Chamisa’s messages at these rallies have resulted in debates on social media with many questioning his maturity saying that he is just making too many promises. Critics are saying that he is focusing on the ‘what’ part but forgetting the important ‘how’ part. In his defence though, Chamisa has said he already has an election manifesto which explains the ‘how’ part but is waiting for Mnangagwa and his ZANU (PF) party to release their manifesto first before releasing his. The reason for the delay is that ZANU (PF) might steal his ideas, something which he said ZANU (PF) and Mnangagwa have done in the past.

Though receiving criticism on social media for his rally talk, it appears as if he is striking the right button with the audience of the rallies. His rhetoric is being warmly received by the thousands who come to his rallies almost every weekend in different parts of the country.

Buratai: Restoring the Global Image of the Nigerian Army