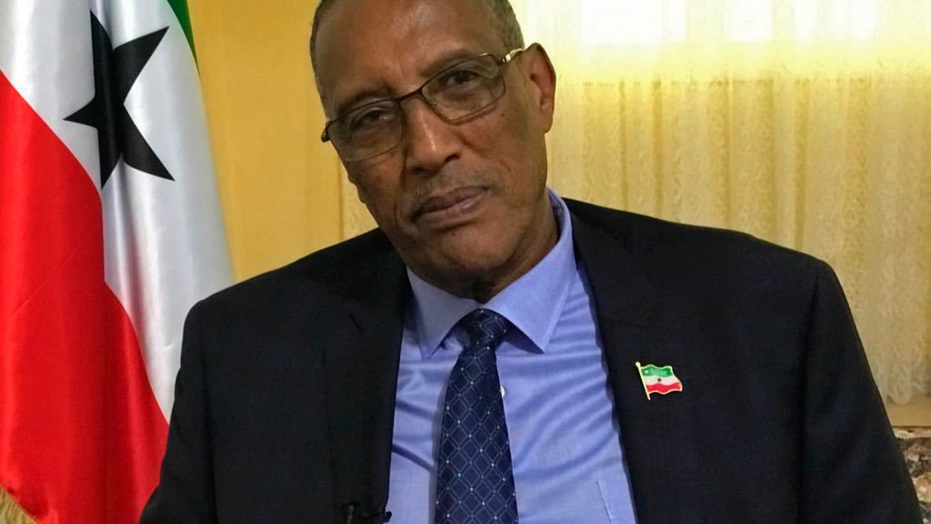 HERGEISA, Somaliland –  Somalia’s breakaway northern region of Somaliland declared its independence nearly three decades ago, but despite having its own currency, parliament and military the predominantly Muslim country hasn’t been recognized by any foreign government.

Somaliland President Muse Bihi Abdi is hoping to change that by aligning his country’s interests with energy-rich Gulf Arab states eager to expand their military footprint in the Horn of Africa along the vital shipping corridor of Bab al-Mandeb, the entryway to the Red Sea for ships from Asia and oil tankers from the Gulf heading to Europe.

Speaking to The Associated Press in the capital, Hargeisa, on Tuesday, Abdi defended an agreement that allows the United Arab Emirates to establish a military base in Somaliland.

“Our government is not so strong and our zone needs to be protected,” he said. “I think we need a friendly country to have a cooperation with military security, we need it.”

Securing the Horn of Africa has become increasingly important for Gulf countries since March 2015, when a Saudi-led coalition launched a war against Iran-allied rebels in Yemen. On Tuesday, the coalition, which includes the UAE, said the rebels attacked a Saudi oil tanker in the Bab al-Mandeb strait, causing minor damage.

Abdi declined to disclose how many Emirati troops would be based in Somaliland or when construction of the base will be complete. The lease for the base is for 25 years.

“Yes, we are allied to the United Arab Emirates and to Saudi (Arabia),” Abdi said.

“All our business, main assets, are in Dubai. All our imports depend on United Arab Emirates, their ports,” he said. “We have relations of business and economic ties with them, so we are allies with them.”

Abdi, who won elections in November, spoke Tuesday from his office in Somaliland’s capital of Hergeisa, home to around 1 million people. Somaliland is far more peaceful than Somalia, where the al-Qaida-linked al-Shabab group carries out frequent attacks.

Except for a Coca-Cola factory outside the largely impoverished city, there are no visible signs of multinational companies. The city, which moves without traffic lights, is not home to any major international hotel chains, American fast food restaurants or bustling shopping malls.

Instead, the country is capitalizing on its strategic location near Bab al-Mandeb.

Somaliland signed an agreement last year with one of the world’s largest port operators, DP World, to operate its Port of Berbera. The agreement with DP World, which is majority-owned by the Dubai government in the UAE, was signed the same year that the UAE’s plans to build a naval base in Berbera were revealed.

It’s the latest example of how DP World’s business dealings in East Africa increasingly mirror the UAE’s military expansion in the region.

The UAE, which is also reportedly building up a long-term military presence in Eritrea, is not the only country with troops in East Africa. Turkey opened a military base in Somalia last year. Neighboring Djibouti is home to a U.S. base that launches drone missions over Somalia and Yemen, as well as a Chinese military base and Japan’s first overseas base since World War II.

Last week, Somalia asked for the United Nations Security Council to intervene to stop the UAE from building the military base in Somaliland. Somalia said the agreement between the Gulf state and Somaliland, which it refers to as the “Northwestern Region of Somalia,” was made without the consent of Somalia’s government and is in “clear violation of international law.”

Somaliland’s minister of foreign affairs, Saad Ali Shire, said his country’s alliance with the UAE is a sign of the growing “realization that Somaliland should be recognized.”

“We feel that we have the right to be recognized. We have the right for self-determination under the U.N. charter,” Shire told the AP. “That’s a fact which I think everybody should recognize, and perhaps the UAE is finally coming around to recognize that fact as well.”

DP World’s recent expansion into Somaliland creates an alternative corridor for imports for landlocked Ethiopia, a country of 110 million people and the largest economy in the Horn of Africa. Cargo going to Ethiopia currently constitutes 15 percent of Berbera port’s operations.

The deal with Somaliland prompted Djibouti to abruptly end DP World’s contract for its Doraleh container terminal in February.

DP World’s Berbera operations manager, Ali Ismail Mahamoud, acknowledged that the port is a competitor in East Africa. He spoke to the AP on a recent visit to the port.