One of Beijing Enterprises’ players has recalled the “horrible” moment when Cheick Tiote fell to the ground in training and later died.

The former Newcastle United midfielder, 30, passed away on Monday, about an hour after he collapsed.

“He just collapsed right in front of me,” Jin Hui said in a post on social media platform WeChat Moments, and seen by BBC Chinese.

The 29-year-old said he joined with the first-aid efforts on the pitch.

“I still cannot believe this,” he added.

“Beijing Enterprises Group FC mourn with deep grief over Mr Tiote’s death,” it read, adding that Tiote made an “outstanding contribution to the club”.

On Tuesday, members of an official fan club visited the Beijing’s home stadium to lay flowers on the pitch in a brief ceremony.

“They came this morning in the rain to pay tribute to Mr Tiote,” Chen Zhenting, a spokesperson for the fan club, told BBC Chinese. “We are in pain and very, very sad to see him die at such a young age.”

Chen said there would be further commemoration at Beijing’s home game against Harbin Yiteng later this month. 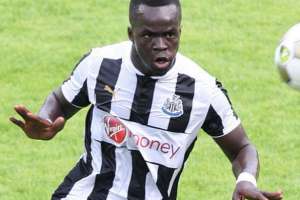 “There would definitely be a silent tribute.”

The cause of Tiote’s death has not been announced, with the club waiting for the Ivorian’s family to travel to Beijing.

“We must wait until his family is here,” club spokesperson Yang Xiaoxiao said.

“We need to respect their opinion and not to speak more at this moment.”

Meanwhile, Beijing head coach Gao Hongbo has revealed the club has seen a request to postpone their next fixture rejected by opponents Meizhou Hakka.

“We hope the [Chinese] FA would offer some help to postpone the match on Saturday,” Gao added.