By Maureen Chigbo, reporting from Ethiopia  *| 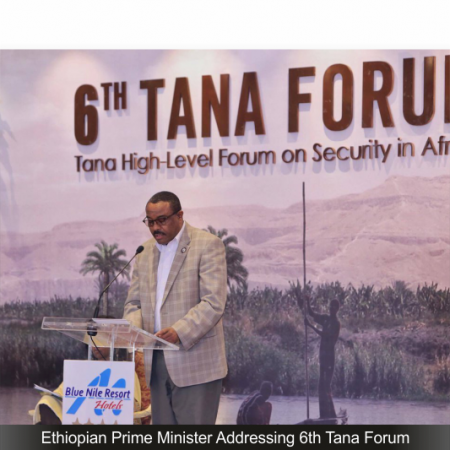 THE sixth Tana High Level Forum on Security in Africa presented another opportunity for African leaders, academics and security experts to discuss issues affecting the growth and development of Africa in an informal setting barred from rigid protocol and officialdom. Both the young and old in the presence of presidents and ex-presidents of some African countries brainstormed on how Africa can manage its natural resources in a sustainable way to move the continent forward and provide job for the youths.

It was particularly exhilarating when Farah Nguegan, Ph.D. candidate, International Relations Institute of Cameroon, who won the Tana University Essay Competition with her essay entitled: “African Natural Resource Governance” addressed the audience. She stressed the importance of education and job creation through effective management of Africa’s natural resources to absorb the teeming unemployed youths in the continent.

Participants at the event were not disappointed as those who spoke to Realnews said some of the frank contributions were provocative although their expectations were met. Some also made suggestions as to how to improve the forum in future. For instance, Elissa Jobson, African Union, AU, Relations, who is attending the forum for the fourth time, thinks the forum is unique in making it possible for people to have access to heads of state of African countries. However, she observed that

“It’s got a bit more formal. It will be good to go back to it being a dialogue between experts and heads of state. But even so it’s unique; there is no other forum as intimate as this”.

The two-day forum from April 22-23, started with launch of the book: Making Africa Work: A handbook for Economic Success, co-authored by Olusegun Obasanjo, former president of Nigeria and chairperson of the Tana Forum and Greg Mills, director of the Brenthurst Foundation, South Africa.

The book is a practical account of how to ensure growth beyond commodities, and to create jobs. It is a handbook for dynamic leadership inside and outside the continent based on the authors’ experience.

According to Obasanjo, the book is the first to be launched at the Tana Forum since it started six years ago, adding that there is no reason why a book launch should not be part of the forum’s future activities. “It is not an academic book. It is a realistic book about what has been, what is and what should be in the future,” Obasanjo said, adding that there is no magic formula for leaders to develop Africa except to do a few things right and continue to do them right as stated by Lee Kuan Yew, former late leader of Singapore.

Shortly after the book launch, another special event: the 2017 Annual Meles Zenawi Lecture Series saw Akere T. Muna, chairperson of the International anti-Corruption Conference and Sanctions commissioner of the African Development Bank group, Cameroon, delivering the lecture: “Leadership in Africa: Reflections on the legacies of the late Wangari Maathai, environmental activist and Nobel Peace laureate.” During the lecture, he emphasised that leadership is not about noise-making but about setting the right example, adding that the passion you brought into what you do as a leader guarantees your success.

[L-R] Billene Seyoum, moderator at the lecture delivered by Muna

This is exactly the kind of leadership Hailemariam Desalegn, prime minister of the Federal Democratic Republic of Ethiopia and Obasanjo demonstrated at the opening of the 6th the Tana High-Level Forum on Security in Africa which ended a resounding success. Desalegn recollected Ethiopia’s long standing contribution to Pan Africanism and its ideals, emphasising that Tana High Level Forum on Security in Africa is only one aspect of Ethiopia’s commitment to African causes. Also, when Victor Ochen, a young participants from Uganda, observed that the forum did not involve youths who are future leaders of Africa in the proceedings at the forum, Obasanjo readily accepted and promised to correct the omission in future. While welcoming participants, Obasanjo noted, with immense appreciations, that the Forum has established itself as a front-runner gathering in the calendar of high-profile events of its kind specifically addressing broad issues of peace and security, especially as they concern the African continent.

“I personally believe – and I imagine many of you must share my conviction – that with the myriad peace and security issues confronting our continent, the importance of this Forum for the frank exchange of ideas and in the search for creative solutions is assured,” he said.

As it has become the Tana Forum tradition, Obasanjo reminded participants of the informality of Tana and the mutual learning process it provides. “Let me begin by casting my net wide. We cannot but be globalists because whatever happens anywhere else in the world has implications for us in Africa. We must therefore think globally while we act continentally to ensure peace and security in Africa as a crucial contribution to global peace and security.

He noted that since 2016 Tana Forum, some water has passed under the bridge elsewhere in the world which cannot be ignored. The first was the heavily increased outflow of migrants from Africa and Middle-East to Europe and the effect it had on the political and social landscape of Europe. The phenomenon has remained as the causes of migration from the countries of origin are still very much there. The next issue flowing directly or indirectly from migration is what is regarded as rising populism and abandonment of liberal attitude or de-globalisation in favour of diminishing integration leading to Brexit in June last year.

He observed that by “admiring Brexit and using it to campaign in the U.S, saw the emergence of President Donald Trump, who against popular run of the mill became the 45th President of America with his populism, America First etc and the unknowns and the apprehensions about his presidency.

“There is a lot of disquiet about French election. All these cast dark cloud on the horizon of world peace, security, stability and solidarity especially as they are superimposed on the war in Syria which has now lasted more than six years, the situations in Iraq and Yemen,” Obasanjo said.

According to him, “We are moving from the fairly liberal, stable if not totally predictable world to an unstable, unpredictable, populist, world with disequilibrium. There is danger for every nation and for every region in such a world. And Africa by virtue of its apparent weakness cannot wish for such a world where it will be a pawn and a victim especially in light of our current precarious peace and security situation.”

No doubt, the security of Africa to a large extent hinges on the management of its natural resources for the betterment of its people. That is why the theme of the 6th Tana Forum entitled: “Natural Resource Governance in Africa” is apt.

After all the presentations, deliberations, and discussions on the various aspect of the natural resources governance in Africa covering the extractive sector, biodiversity, land and oceans by different discussants, Stergomena Lawrence Tax, executive secretary, Southern Africa Development Community, SADC, Botswana, presented the takeaways from the forum. She among other key issues reiterated that Africa is blessed with countless God-given resources, whereas, the resources are extremely beneficial they are often negatively impacted by poor or insufficient systems of governance. These resources if managed appropriately will transform African economies.

Another takeaway is that natural resources extraction, distribution and usage have social, economic, environmental, and political underpinnings, influenced by both endogenous and exogenous factors. These attributes have generated low-intensity tensions or large scale insurgencies, and are more complex in situations where there is lack of transparency and insufficient accountability and management mechanisms in licensing, exploration, contracting, extraction, and in revenue generation and sharing, just to mention a few.

There is also the relationship between natural resource governance and security which is also affected by the global resource politics, which is mainly generated by the involvement of multinational corporations. This has fueled social inequalities, where the locals have not benefitted from the extractions while the global actors have become grandiose.

Tax said that lack of, or inadequate benefits that accrue to the intended beneficiaries result in conflicts and, hence, insecurity, which give an advantage to the global illicit players to smuggle the resources. Due to the availability of the infrastructure for illicit financial flows, there is tendency to fuel armed conflicts and increase security threats in order to continue with illegal extractions.

As a way forward, Tax said in order to ensure proper governance of the natural resources, “there is need to re-orient the focus, from the conventional understanding of extractive industries, namely, oil, gas and minerals, etc, to broader natural resources endowments, which include non-extractive natural resources such as land, water, seas, forests and biodiversity. All these have a security bearing and direct impact to sustainable growth and development of African economies.

Obasanjo at the 6th Tana Forum

Africa needs to build the necessary capacities, in both, state and non state actors, that will facilitate proper management and governance of natural resources in among others, contract negotiations and management, enforcement of rights and responsibilities, monitoring and evaluation, etc. Without setting aside adequate funding for this cause, the whole agenda becomes easily distorted because, as it is said, “Those who pay the piper play the tune“. African countries cannot continue to rely on external funding if is to ensure proper governance architecture of her natural resources.

She said natural resources are supposed to benefit the people of a particular sovereign state. This calls for participation of the local communities in decision-making processes to instill a sense of ownership and ensure sustainable use, thereby reducing tensions and conflicts. Deliberate efforts should be made to promote and facilitate reviews of national policies and legal frameworks in order to promote ownership and facilitate transparency and accountability in natural resource management and governance, while ensuring optimal use and benefits.

The SADC executive secretary said that as long as Africa continues to lose its natural resources to global actors, the continent will continue to face discontentment among its citizenry. This will continue to cause conflicts and threaten peace and stability in Africa.

Unlike the scramble for Africa of the yester-century, African citizens have become of age in terms of their knowledge of resource governance. They demand that African resources should be used for Africa’s development, and that can only happen if there are measures to institute accountable and transparent governance systems.

According to her, at the centre is how African national governments can develop a long term transformation ideology and strategy, and promote good governance, rule of law, accountability and transparency.

Malawi, Ghana and Kenya to take part in WHO malaria vaccine pilot programme