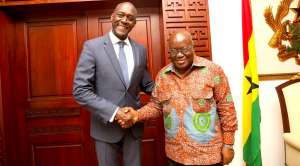 The World Bank’s Vice President for Africa, Mr. Makhtar Diop, on Tuesday, April 4, 2017, paid a courtesy call on the President of the Republic, Nana Addo Dankwa Akufo-Addo, to extend the support of the Bank towards helping to address the numerous challenges confronting the Ghanaian economy.

At the meeting, which was attended by the Vice President of the Republic, Dr. Mahamudu Bawumia; Chief of Staff, Akosua Frema Osei Opare; and Finance Minister, Ken Ofori-Atta; Mr. Makhtar Diop noted the World Bank was concerned about “one of the engines in the sub-region” and was, thus, determined to help Ghana emerge out of her current situation.

Applauding the decision of President Akufo-Addo to stimulate private sector activity to be the instrument of growth for the Ghanaian economy, he explained that this decision was prudent, considering Ghana’s high levels of indebtedness and the lack of fiscal space.

According to him, “the financing needs that the economy must have to sustain the growth that is envisaged for Ghana cannot be attained through public financing, due to the high level of indebtedness that you inherited. So we need to help create all the conditions for the private sector to lead this process.”

He, therefore, pledged the support of the World Bank – experience, technical and monetary – to helping the government of Ghana succeed.

Makhtar Diop added that the World Bank is also amenable to helping Ghana to process its cocoa, and depart from being a mere exporter of cocoa beans, akin to the support given to Cote d’Ivoire, which has received a $120 million facility to boost value-addition for its cocoa industry.

“Your vision is very clear, and we are supporting it. We have discussed with your team the options from which we can help you address the difficult situations you are facing today. You can count on our full support to be with you and to work with you towards a lasting solution,” he added.

Makhtar Diop congratulated President Akufo-Addo and Ghana “on being an example in Africa on how democracy and political transitions can be held successfully.”

On his part, President Akufo-Addo thanked Makhtar Diop for the gesture of his visit, and acknowledged the role he was playing in the global financial organization, adding that “you have gained the confidence of your peers and the admiration of the continent.”

The President was thankful for the commitment of the World Bank towards the realization of his vision of a private sector-driven economy, explaining that despite the promise of Ghana’s economy being derailed in recent years, largely as a result of the mismanagement of the economy, he was confident of the return of the country onto the path of progress and prosperity.

Describing Ghana as “a country of immense potential”, with “a people who are capable of working hard to produce a prosperous Ghana”, President Akufo-Addo noted that his government is determined to create a conducive climate to stimulate private enterprise growth in the country.

The ‘Asempa Budget’, which has been passed by Parliament, he explained, contains policy initiatives that will create the needed fiscal space for government to implement its programmes, as well as spur on the development of the private sector.

“It is only when we grow the economy that we will create jobs and prosperity for the people,” he added.

The President also reiterated his commitment to protecting the public purse and dealing with corruption through the “office of Special Prosecutor, which will be a creature independent of the Executive. It will have the mandate to deal with issues of corruption and allegations of corruption against public office holders.”