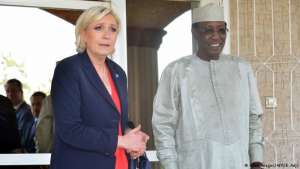 Francafrique describes an informal web of relationships Paris has maintained with its former African colonies and its support, sometimes in the form of military backing, for politicians who favor French business interests.

Le Pen, one of the frontrunners in the presidential election, spoke at the end of a two-day visit to Chad where she sought to outline her policies regarding the continent, which has long held an important place in French foreign policy.

“It was only in coming here and explaining that I am able to get around the lies of my political adversaries who don’t want Africa to hear me,” the National Front (FN) party candidate said at a news conference in the capital N’Djamena.

“I’ve come to condemn the policy of Francafrique that they’ve carried out. I have come to say I will break with this policy,” she said.

Le Pen, a nationalist and vocal critic of the European Union, has spoken of her desire for France to abandon the euro currency.

In N’Djamena, she also called for an end to the CFA franc, a currency used in 14 west and central African nations, which is tied to the euro at a fixed exchange rate – with the peg guaranteed by the French Treasury.

“I understand the complaints of African states which consider as a matter of principle that they must have their own currency and that the CFA franc is a hindrance to their economic development. I completely agree with this vision,” she said.

In building the FN into a viable mainstream party, Le Pen has worked to shake off the baggage of its historical anti-semitism and deflect current accusations of racism and Islamophobia.

And while she sought to highlight that French citizens of African origin have the same rights and duties as any other citizens, she maintained the hard line on immigration that has solidified her support among many voters.

“Because France is sovereign, because it has its laws, because everyone who enters a country must respect these laws, foreigners living illegally in France will be sent home and French borders will be restored,” she said.

Africa: Graça Machel - Africa Will Not Move Till Women Are in Charge