Botswana’s President Ian Khama will step down next year, the media reported. 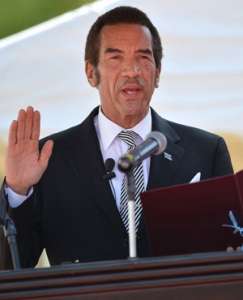 He was the chosen successor of Festus Mogae, who stepped down at the end of his second term, after a decade at the helm.

The younger Khama secured a five-year term in October 2009 after BDP swept to victory in a parliamentary election.

He secured a second term following the August 2014 polls, in which his party won the most seats.

He had became the Botswana vice-president in 1998.

The forthcoming transfer of power will take place during the BDP congress, the Southern Times newspaper reported.

BDP has governed the country since independence in 1966.

According to the the Southern Times, the tradition of the BDP was that the vice-president should automatically succeed the outgoing president.

According to the Southern Times, Mr Masisi, currently the BDP chairperson, had an advantage over his opponents because he was in control of the party structures.

BDP Secretary General, Botsalo Ntuane was quoted as saying his party’s constitution permits any member in good standing to contest for any vacant position.

Botswana is one of the Africa’s most stable countries and the continent’s longest continuous multi-party democracy.

The southern African nation was relatively free of corruption and has a good human rights record.

Whereas critics describe President Khama as an authoritarian leader, his supporters say he was decisive and efficient.

His no-nonsense approach has made him popular abroad as he has broken ranks with regional leaders’ timid approach to the democratic abuses by Zimbabwe’s President Robert Mugabe.

President Khama was born in the UK while his father was in exile.

He is a graduate of Sandhurst college in Britain and was the commander of the Botswana Defence Force (BDF).