Schools have remained closed and business paralyzed in the English-speaking northwest and southwest regions of Cameroon, as the strike initiated by teachers and lawyers against what they call the overbearing use of French enters its fifth month.

Three strike leaders and another group of 25 people arrested from the English-speaking regions appeared in the Yaounde military court Thursday, and the case was again adjourned.

Bibixy Mancho sang that he would never forget his home, as the military escorted him to the court.

The military ordered a handful of people who came out to see the suspects to not shake hands with them. Among the curious onlookers was Minang Flora, who said she traveled 400 kilometers (250 miles) to support the suspects.

“I want to see them, to encourage them and pray for them,” Flora said. “No matter how long it takes, we shall get there.”

Along with Nkongho Felix Agbor-Balla, Fontem Aforteka’a Neba and Bibixy Mancho, who are accused of organizing demonstrations in December that turned violent, 25 other suspects have been arrested from the English-speaking regions since the strike started.

Defense counsel Eta Bisong Junior said they found it inappropriate for all of them to be judged together.

“There was an application for two cases, two separate cases to be joined and heard and determined at the same time, and the lawyers for the defense were opposed to that. The court has adjourned the matter to the 7th of April for the ruling,” Junior said.

On April 7, the court will rule on whether the three leaders should be judged separately or together with the 25 others.

The case itself has been adjourned to April 27. The court rejected appeals for the three leaders to be granted bail.

The charges levied against them are conspiracy to terrorism, rebellion against the state, incitement of civil unrest, breach of the constitution, provoking civil war by inciting the people to take arms against each other, and propagation of false information. Cameroon is using a 2014 law on suppression of acts of terrorism and a 2014 law on cybersecurity and cybercriminality. The suspects could face death sentences.

Some strikers are calling for a return to federalism, while other leaders want secession. President Paul Biya, after meeting Italy’s President Sergio Matterella this week, said they discussed the issue, but that national unity in his country was not up for negotiation. 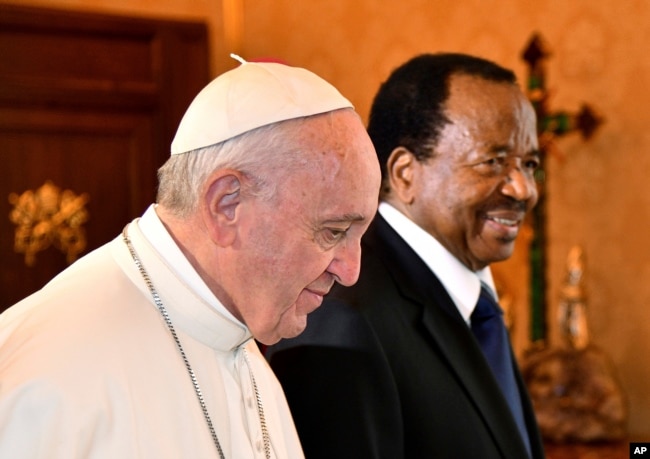 Biya said they spoke about the situation in the northwest and southwest regions of Cameroon, and he assured the president of Italy that a majority of Cameroonians want peace and support two fundamental principles — the unity and diversity of their nation as prescribed in the constitution.

English-speaking lawyers and teachers have been on strike since November. The strike has drawn other activists who accuse the state of marginalizing English speakers living primarily in the southwest and the northwest.