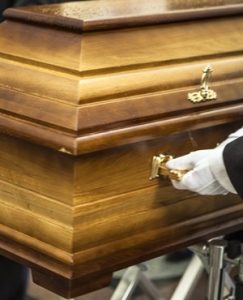 A deceased Ugandan man was reportedly buried with at least $5 700 which he said he wanted to offer as an “offertory” so that God could “forgive him” of his sins and “save him from hell fire”.

According to the Daily Monitor newspaper, Charles Obong, 52, made the request in his will, his family claimed.

However, the money was dug up after church, community elders were made aware of the ‘bizarre’ request.

Reverend Joel Agel Awio was quoted saying that there was no amount of money that could buy eternal life, adding that God could not accept such “a golden handshake”.

The deceased’s brother in law confirmed that when the body of Obong was exhumed $100 notes amounting to $5 700 were recovered from the former government employee’s coffin.

Obong died on December 17, 2016, after a long illness and was buried at his ancestral home at Adag-ani village, Bar-pii parish, Aromo Sub-county in Lira District, on Christmas Eve.

Obong was buried in a metallic coffin estimated to have cost $5 509.60.

According to Tuko, Obong reportedly feared that his sins which included corruption during his time in government would lead him to be condemned to hell.

In his will Obong had reportedly ordered that his brother and sister should be present to to ensure that his wife secured the money in his coffin.

His wishes were, however, short-lived as his clansmen exhumed the body and removed the money, saying it was a taboo to bury someone with money.