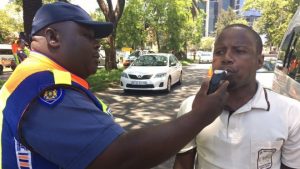 South Africa knows it has a huge problem with drink-driving and is considering some tough measures to tackle it.

The transport minister recently suggested that drink-driving offenders should face similar punishments to murderers and rapists, while the government is also considering raising the legal age of drinking to 21 and punishing liquor sellers for offences committed by their customers.

Over the festive season, more than 1,700 people were killed in road accidents, a slight increase on last year, and close to 6,000 motorists were arrested for driving under the influence of alcohol.

The problem is especially bad during the party-season in December but authorities feel the attitude towards drinking and then driving is a year-long problem.

According to the World Health Organization, 58% of deaths on South Africa’s roads are alcohol-related – a higher proportion than any other country which supplies this data.

At the moment, most people found to be drunk at the wheel are detained to sober up for a few hours, and then have to appear in court later where they usually receive a fine – unless they are charged with killing someone.

But Transport Minister Dipuo Peters told journalists this week that she thought offenders should be treated far more harshly.

“We are seeking to reclassify drunken driving from schedule three, which is less severe, to a more severe schedule-five offence, to ensure that those who negligently cause crashes on the road do not get bail easily and spend time behind bars,” she said.

Schedule five is the same level as murder and rape.

This may be not happen any time soon but Ms Peters says her office is in talks with the Justice Department to introduce tougher sentences for negligent and reckless driving.

Officials hope that changing the law will help to reduce fatalities, especially among young people.

But alcohol is a big part of socialising in South Africa, whether at home, braais (barbecues), township shebeens or high-class bars.

It has been reported that there are often more watering holes in poor areas than libraries or schools.

The country has the highest level of alcohol consumption in Africa per capita, nearly double the continent’s average, according to the WHO.

Only 40% of the population drinks but those that do, drink excessively, according to the Department of Trade and Industry (DTI).

Officials worry that alcohol abuse is on the rise, especially in rural areas and townships.

On average, South Africans consume between 10 and 12.4 litres of pure alcohol a person a year, according to local figures.

The global average is 6.2 litres a year, with Moldovans being the world’s heaviest drinkers, consuming 17.4 litres, while Russia and the UK both consume 12, according to the WHO.

As well as drink-driving, the high levels of alcohol consumption is a factor in fights, murders and domestic abuse, officials say and this is why they want to change the law.

One proposal being considered is to raise the age limit to buy alcohol from 18 to 21.

The Department of Trade and Industry also wants to make vendors liable if someone buys alcohol from them and then commits a crime, such as having a car accident under the influence of drink.

This could lead to traders losing their licence to sell alcohol. The authorities hope these measures will stop traders from selling to people who are already drunk.

On a Monday evening at Meli, a smart bar in Soweto, the mood is jovial.

Most people are still on holiday, jazz music is playing in the background, the smell of food is wafting through the air and the alcohol is flowing.

But Nkholeki Nomgca, 21, who is drinking at the bar, is not convinced that such regulations would have the intended consequences.

“It’s going to impact a lot of people negatively. In my opinion it’s going to create what I call the forbidden fruit syndrome, where if you make something unattainable they want to attain it even more,” he says.

But Nthabiseng Tsheisi, 20, who would be affected by the law if it came into effect now, disagrees.

“I personally feel like changing the law is going to be a good initiative. Even though the law of 18 is not even strictly adhered to now,” she tells me.

“When I go out, I watch how much I drink but sadly this isn’t the case for a lot of people my age. We can really drink too much and get out control. The government needs to do something about it.”

Alcohol is affordable and widely available – from large bottles of cheap wines that sell for about $3 to high-end whiskeys.

For the really cash-strapped, home-brewed alcohol offers an alternative. These concoctions are often incredibly high in pure alcohol.

The liquor amendment bill was presented to parliament late last year and later opened for public comment, but has yet to be passed.

MacDonald Netshitenzhe, the chief of policy at the Department of Trade, says it is not only the authorities that are pushing for such reforms.

“People on the ground want these changes, particularly in the poorer communities where alcohol abuse is much higher and there is an oversupply of taverns,” he told the BBC.

“We are saying people are dying, we want responsible drinking.”

But businesses are not happy with the proposals.

“I feel like we are being [unfairly] targeted,” says Lele Motsoane, one of the managers at Meli.

“Teaching responsible drinking should be a community effort which starts in people’s homes.

“There are going to be problems with the changes. How do we tell people who are old enough to vote how to spend their money?”

Other critics agree that instead of policing drinking, more needs to be done to educate people on how to drink safely – so they can regulate their own drinking.

South Africa has existing legislation geared towards fighting alcohol-related problems but enforcement of those laws remains a problem, mainly because they require constant monitoring and there simply aren’t enough people employed to do that.

Kenya Targets 1 Million Digital Jobs for Youths in a Year

Coronavirus: UN Country Team in Zimbabwe message on International Day of the Girl Child “My Voice, Our Equal Future”