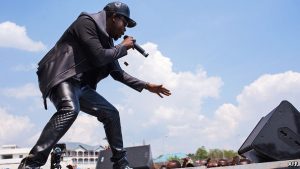 IN THE Democratic Republic of Congo there are three ways to make it big, says Lexxus Legal, a rapper (pictured). Standing in his house in Kinshasa, the capital, underneath a mural of Congo’s first prime minister, Patrice Lumumba, he lists them. First, you can become a politician. Second, you can join the army (“but you need to be at the top: a general, not a footsoldier”). Finally, you can set up a church. “That is what you call having power,” he says. Noticeably, he rules out his own profession. “The musicians in this country are beggars,” he says. “They are obliged to sing and dance to please politicians and businessmen. If you sing as I do, controversially, you really have no chance.”

Music is probably Congo’s most influential export, though nowhere near as lucrative as copper or gold. Whereas in the West the country’s name inspires pictures of child soldiers fighting bloody battles, in most of Africa it is associated with “rumba Lingala” (Lingala is the language of the Kinshasa street). This upbeat music has become genuinely pan-African in the 60 years since Congolese musicians were first inspired by Cubans. It can now be heard from Abidjan to Dar es Salaam; in Congo, its home, it is practically a religion.

Alas, like the country itself, Congolese music is blighted by corruption. Since Congo has few producers or studios, only a tiny market for sales and a population who almost all live on a few dollars a day, Congolese musicians have to survive from patronage, like Mozart in 18th-century Vienna but with even more flamboyant clothes.

The politicians are happy with this arrangement. In a country where almost nobody reads newspapers and everyone has a radio, music is the easiest way for them to reach potential supporters. Music and politics in Congo are thus entwined. And with an election looming in 2017, the relationship will only grow closer.

On a plump sofa, Tshala Muana, a singer, explains how she began as a dancer in the 1970s. Under Congo’s then dictator, Mobutu Sese Seko, she wasn’t allowed to sing. As part of his effort to create a single national identity (a policy he called authenticité), songs in Lingala were favoured and those in other local languages—such as Tshiluba, in which Ms Muana sings—were discouraged. Her luck turned in 1997, when Mobutu fell and was replaced by Laurent Kabila. He invited Ms Muana, who had moved to West Africa, back to Kinshasa. “Musicians should live in their own country,” she recounts him telling her. “So he became my sponsor.”

Now, Ms Muana sings for his son, Joseph Kabila, who became president in 2001 when his father was assassinated. Her songs in Lingala and French include such hits as “Votez Joseph Kabila” and “Kabila tres fort”. When she met your correspondent, a few days before the end of Mr Kabila’s second (and supposedly final) term in office, many wealthy residents had fled, fearing riots. Ms Muana says she isn’t worried by her association with the president. “I may sing for the president, but even the opposition listen to my songs at their rallies,” she says, nonchalantly.

And indeed, the expectation that musicians will be mercenary is universal. On radio stations across Congo, it is common to hear the names of politicians punctuating songs. This is known as “Libanga” (literally, “small stone”, of the sort that a child might throw to attract attention). It is not done out of ideological conviction. Werrason, one of Congo’s most famous musicians, once produced a song in which he named 110 different people, many of whom would have paid for the privilege. Only breweries and mobile-phone companies, with their big marketing budgets, can match politicians’ largesse.

Does it matter that Congo’s music, its biggest cultural export, is polluted by politics? David Van Reybrouck, the author of an excellent history of Congo, says close ties have “always existed between music and politics”. The country’s first hit was the song “Independence Cha-Cha”, which was first performed in January 1960, a few months before Congo won independence from Belgium.

Mobutuism was supported by Franco Luambo, one of the original rumba stars. Even the launch of the Congolese franc, which replaced the hyperinflated zaire in 1997, was supported by a musical propaganda campaign.

Yet Mr Legal, who raps in French about war and corruption, thinks it is a problem. “Everything that we Congolese do is driven by music,” he says. “But in music it is difficult to explain 10,000 dead people. We keep dancing instead of answering the real questions.” Congolese living abroad tend to agree. Before the elections of 2006 and 2011, musicians associated with the government were boycotted by Congolese in Europe. Werrason was assaulted twice in restaurants in Brussels and Paris because of his support for Mr Kabila.

This year, Congo is meant to hold elections to replace Mr Kabila, under a deal struck with the opposition on New Year’s Eve. Already, music naming politicians is filling the airwaves on Kinshasa’s Lingala radio stations. “It is nothing but politics now,” says Ms Muana. If Mr Kabila does indeed step down, the ensuing rush for jobs will spark a festival of patronage. Sadly, few think Mr Kabila, who has already overstayed his mandate, plans to give up the job. And after 16 years in which their lives have not improved much, few people support him. If he does intend to stay in power, he will need more than a few songs.

Zeinab Badawi uncovers stories from across the continent in new series of History of Africa.