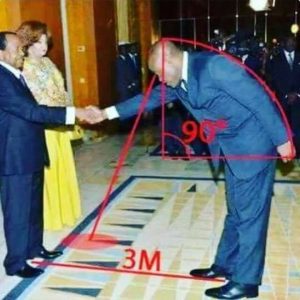 The hashtags #BidoungChallenge and #CourberdosChallenge meaning to bend the back, have been included in 11,000 tweets.

Cameroonians have been recreating the image as well photoshopping the original on social media.

One user on Twitter added some geometry to illustrate the angle and distance of the bow to the subject.

Afrik2 Radio tweeted this imitation of the original image.

Another example of a low bow was recreated here.

Another user tweeted (in French): “We just hit rock bottom here,” as the bow is even lower in this picture.

Can you get any lower? This man could.

Animals also got in on the act. Why Africa's 'most beautiful' countries became beautiful; and how you can cheat the good looks lottery