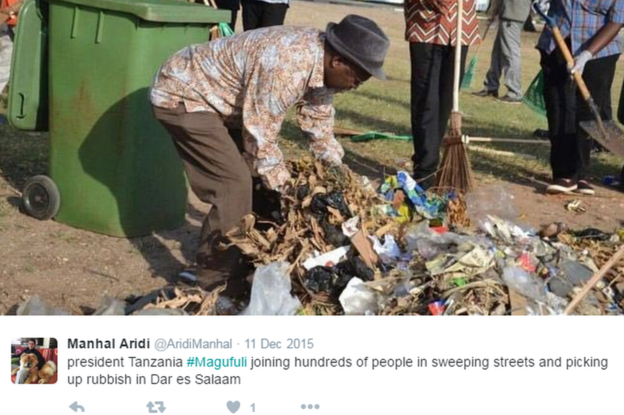 On John Magufuli’s first day as Tanzania’s president, a year ago tomorrow, he created a storm on social media by making an unannounced visit to the finance ministry, catching the workers off-guard. But what else has he achieved in his first year? The BBC’s Dickens Olewe looks at his highs and lows.

What would Magufuli do?

During that visit to the finance ministry, he reportedly asked after those who were not at their desks – a subtle message that he would not tolerate the legendary absenteeism of government workers.

He said he was keen to ensure that the government would have enough money to fund its election promises.

Surprise visits of government offices have become a trademark, meant to project his looming presence and to instil discipline and accountability.

But perhaps his most effective stunt yet was leading the country in cleaning the streets on independence day, 9 December.

He had already announced the cancellation of the planned lavish celebrations, with the allocated funds going to cover expenses in public hospitals.

This act boosted his reputation among East Africans, inspiring a hashtag on Twitter; #WhatWouldMagufuliDo which was widely used in neighbouring countries.

Although the hashtag was mostly used to mock Mr Magufuli’s austere policies, it unwittingly defined his leadership style, which many have come to admire.

Despite winning early admirers, many doubted that he would maintain his hands-on strategy, but so far he seems to have dumbfounded his critics.

He continues to attract admiration for following through his campaign promises to change “business as usual” in Tanzania. A recent poll says he has a 96% approval rating.

“There is no doubt that President Magufuli is very popular among many ordinary Tanzanians,” political analyst Kitila Mumbo told the BBC.

“But many are also keen to see him provide civic space for freedom of expression and political gatherings and rallies which his government banned a couple of months ago.”

Weeks after he assumed office, government officials seem to be following his cue.

A top local official, probably wanting to impress, ordered the police to lock up workers who had arrived late for a meeting.

The move was criticised by human rights groups who said that employment laws should be followed.

The BBC’s Sammy Awami in Dar es Salaam says that the attitude of government workers has changed since Mr Magufuli came to office:

“They are now more willing to do their jobs and are afraid of engaging in corruption. People are experiencing better services in hospitals and schools,” he says.

The president’s main promise of extending free education to secondary school, which came into effect in January, has also been well received, our correspondent adds.

In May, an audit ordered by Mr Magufuli revealed that there were some 10,000 “ghost workers” on the public sector payroll.

Payments to the non-existent employees had been costing the government more than $2m (£1.4m) a month, according to the prime minister’s office.

Such revelations continue to magnify the challenges the country faces and his actions endear him to Tanzanians.

A recent example of his popularity came during a visit to neighbouring Kenya earlier this week, only his third foreign trip since he came to office.

His visit coincided with news of an alleged corruption scandal that has rocked President Uhuru Kenyatta’s government.

Kenya’s top cartoonist Gaddo depicted state officials, who had gone to receive Mr Magufuli at the airport, dashing off as he emerged from the plane holding a whip.

His image as a corruption fighter has captivated Kenyans who suggested that Mr Kenyatta’s government should get tips from him:

He listed Mr Magufuli as a petty dictator, saying that his government’s actions to shut down the media and intimidate opposition parties shows that he’s “an aspiring dictator”.

At least 10 people have been charged for “insulting” Mr Magufuli on social media platforms, leading to criticism from human rights organisations.

His popularity seems to be the antithesis of what US President Barack Obama famously called for as a solution to the continent’s political problems during his inaugural visit to Africa in 2009: “Strong institutions instead of strongmen”.

Mr Mumbo told the BBC that despite Mr Magufuli’s popularity, many Tanzanians also want to see an “open-democratic space”.

Attack on freedom of expression

The Millennium Challenge Corporation (MCC), a US aid agency, cancelled nearly $500m (£405m) of funding in March partly on concerns over the enforcement of a cyber crimes law which they say limits freedom of expression.

MCC also expressed concern about the election in the semi-autonomous region of Zanzibar which it said was “neither inclusive nor representative”.

The October election for president of the semi-autonomous archipelago was cancelled half-way through the count.

The opposition Civic United Front (CUF) said the annulment was because it had won, but the electoral commission said there had been widespread fraud.

The information ministry has also banned two radio stations for allegations of “sedition” and a weekly newspaper for “defaming” Mr Magufuli.

It seems these concerns have not shadowed what many consider as his attributes.

African of the year?

In fact, Mr Magufuli might just cap his year by winning the prestigious Forbes Africa person of the year award – he has been nominated for “boosting Tanzania’s economy”.